More than 20 injured parties ranging from Discrimination, Hostile Work Environment to Injuries
Former Employees and other victims not allowed to talk 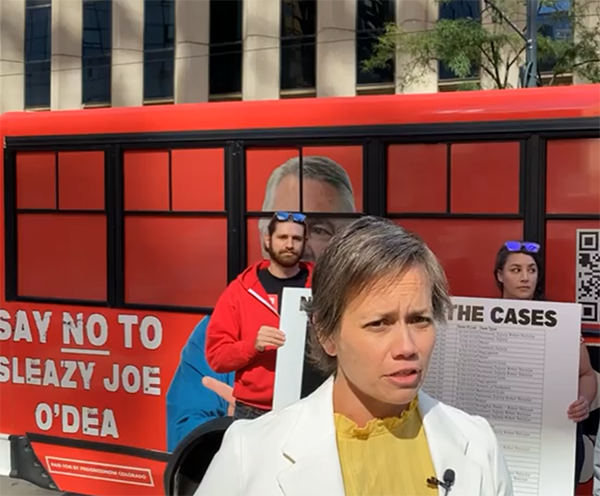 DENVER: Today, the head of Colorado’s largest statewide progressive advocacy organization held a press conference demanding that Republican U.S. Senate Candidate Joe O’Dea allow for any victims and injured parties involved in litigation against O’Dea who are either under Non-Disclosure Agreements or are too scared to share their stories be allowed to speak.

“We are calling on O’Dea to let these people speak. O’Dea should immediately release all of the victims and injured parties from the terms of his non-disclosure agreements and promise not to retaliate against them for sharing their stories,” demanded Sara Loflin, the Executive Director of ProgressNow Colorado.

ProgressNow held a press conference in front of the Colorado Department of Labor and Employment in downtown Denver. Loflin stood in front of a long list of cases from injured parties—more than 20 different parties that have had lawsuits against O’Dea’s company Concrete Express. See list below.

In 2006, Marcus Luscher’s wife, Linnea, a renowned bicyclist, was killed in Boulder by a gravel truck of O’Dea’s company. According to the Colorado State Patrol, the truck was massively overloaded and had defective brakes which O’Dea company’s Concrete Express should have known about. Luscher sued O’Dea company and O’Dea declined to comment. [Longmont Daily Times-Call, 11/10/06, available via roadbikereview.com] And now that O’Dea is running for the U.S. Senate, Marcus Luscher is under a NDA and not allowed to talk.

In 2015, Barbara Johnson of Loveland, worked for O’Dea, and was subjected to a pattern of age and disability discrimination when she worked for O’Dea as a human resources manager for five years beginning in 2011. In her 2019 lawsuit Johnson alleged that she had her bonuses reduced and faced a hostile work environment following a cancer diagnosis in 2014. She further accused O’Dea of dissuading employees from filing workers’ compensation claims and terminating older employees, a pattern she said she was pressured into facilitating in her role as HR manager prior to being fired in December 2015. [“Senate candidate Joe O’Dea settled age, disability discrimination lawsuit with ex-employee in 2021,” Colorado Newsline, 6/14/22]

We recently contacted Barbara Johnson and she, like Marcus Luscher, are under NDA and forbidden from sharing their stories for fear of legal retribution by O’Dea.

“It’s not just Marcus Luscher and Barbara Johnson who had to sign an NDA, we have over 20 different parties who we have tried to contact. And when we could locate the parties, they often would not, could not, or were  too scared to talk,” added Loflin.

“As O’Dea is now running for the U.S. Senate, we demand that he immediately release everyone who may be prohibited from talking publicly due to their NDAs and settlement agreements. When the stakes are this high the public has the right to hear their stories, and O’Dea should not be allowed to silence them,” added Loflin.