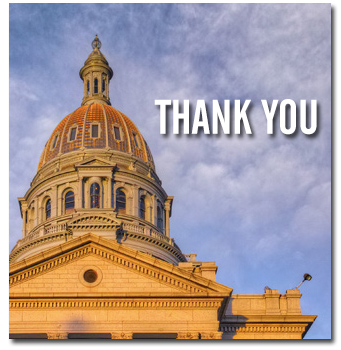 With Congress in recess this week and negotiations over the Build Back Better plan still ongoing behind the scenes with holdout Democratic Senators, I wanted to take a moment to say thanks once again for everything you’ve done to fight for our shared progressive values in 2021.

We can’t control everything that happens in national politics, but in Colorado, we can be proud our elected officials. Thanks to your vigilance and timely action to keep them on the right path, both of Colorado’s Senators remain in full support of the most important components of Build Back Better: human infrastructure to support the economy of the future, permanent funding for Sen. Michael Bennet’s landmark Child Tax Credit, and aggressive action to combat human-caused global climate change.

It’s great to have leaders in Washington representing Colorado who are working to be part of the solution instead of part of the problem. Back at home in Colorado, however, last week we saw even more examples of what could happen if we lose focus on the larger objective. Conservative CU Regent Heidi Ganahl, the state’s last remaining statewide Republican elected official, was joined by right-wing extremist Dennis Prager for a campaign event, where Prager told the audience that “it is an act of child abuse to give a child [COVID] vaccine” and “schools are poison factories.” [1]

If we don’t stay vigilant, this kind of insanity masquerading as leadership is only one election away. It’s why your help and support is needed now more than ever.

Thanks for everything you do week in and week out to fight for progress. Here are a few more great ways to make a difference for the week of October 11, 2021:

Workers at Hello Fresh are organizing a union to make their jobs safer and more sustainable at the largest meal kit company in the United States. While Hello Fresh profited from the pandemic, employees faced disrespect, a COVID-19 outbreak, and preventable injuries. Workers are calling on the company to make sure sustainable jobs are part of the package and that the company pledge to not harass or intimidate workers organizing a union. Your voice matters. Join them.

This year marks the 20th anniversary of the Four Directions March, which was born out of a long struggle to reject colonialism in all forms and to uplift ourselves as Indigenous Peoples. We ask you to join us for a night march and a vigil October 11, the day before Columbus invaded our homelands, to continue that struggle, to remember our lives before the genocide, and to recognize the grief that our communities have been carrying for over 500 years. To reconnect with the land, with old ways, and with ancestors, we will gather at Cuernavaca Park that evening. This site was once a Cheyenne and Arapaho camp and the confluence of the rivers in this area was a historically significant meeting place for many Indigenous Peoples. This will also be the first march since Columbus Day was repealed in Colorado, the birthplace of the racist holiday.

Meet innovator, changemaker, author, and STEM education promoter Gitanjali Rao. At age 15, Gitanjali was named TIME Magazine’s first-ever “Kid of the Year.” Her bold thinking about using technology to help solve global problems has resulted in Tethys, a device that detects lead in water, an AI-based anti-cyberbullying service called Kindly, and an opioid addiction detection device called Epione. Join us on International Day of the Girl to hear Rao share her journey and the role of science as a catalyst for social change.

Because they’re constantly searching for food, bears can come into contact with their human neighbors. These normal encounters are often quickly labeled as “conflicts” and used to justify trophy hunting and other forms of lethal bear “management.” In this free webinar, join black bear biologist Stewart Breck from the U.S.D.A.’s National Wildlife Research Center and representatives from the Humane Society of the United States, Bear Smart Durango, the Boulder Bear Coalition, WildEarth Guardians and the Sierra Club to learn more about bears, their behaviors and simple steps you can take to coexist with them. Together, we can help keep bears alive and people safe!

A Conversation with Stacey Abrams

Join Stacey Abrams, political leader, voting rights activist, entrepreneur, and NYTimes bestselling author for an evening of candid conversation and insights on politics, leadership, entrepreneurship, social justice and being a true voice for change. Designed around worldwide and national events, as well as questions from the audience and community, this conversation with Stacey Abrams will entertain, inform, and empower. Moderated by Gloria Neal.

In 2021, New Era embarked on a Youth Agenda Listening Tour, where we heard from over 1,200 young people across the state about their hopes and dreams, their vision for the future, and their lived experiences. Join us at our virtual townhall where we’ll share what we’ve learned from the tour and hear from some of the young people that participated. We’ll dive into key findings from our data, talk about what’s next for our work, and hear directly from young people about the change they want to see.

Join Tom Gougeon and Dick Farley for an exploration of all of the invisible things that often shape our cities, presented by two people who have spent much of their lives wrestling with the “invisible dictators of form.” This conversation is about the factors—like fire-fighting access, setbacks, bulk planes, view ordinances, underground utility requirements, zoning codes, flood plains, soil conditions, and parking—that affect the shape, character, and functionality of city life.

Please join Sen. Rachel Zenzinger, Rep. Brianna Titone, & Rep. Lindsey Daugherty for a legislative town hall meeting. Our topic this month will be information on the statewide and local ballot initiatives and questions for the 2021 November Election. Ballots will be mailed to all eligible voters beginning on Monday, October 8. Educate yourself on the issues before you cast your ballot!

Save the date: The Bell Policy Center 2021 Ballot Guide: Live Discussion with The Colorado Sun

Join us on Tuesday, October 19 at 5:30 p.m. for a live discussion between the authors of the Bell Policy Center’s 2021 Ballot Guide and reporters from The Colorado Sun. Education reporter Erica Breunlin and inequality reporter Tatiana Flowers will lead the discussion, asking the questions voters want answered as they fill out this year’s ballot. During this 45-minute conversation, we will focus on all three statewide ballot measures and dive into the analysis featured in the Bell’s 2021 Ballot Guide.

We’ll see you next week! Thanks again.