What you can do to fight back this week (September 9) 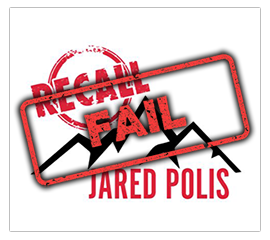 Last Friday, the misguided attempt to recall Gov. Jared Polis ended in a humiliating defeat for the far right in Colorado.

After wasting the time and money of hundreds of far-right Republican volunteers and donors, countless news stories and months of over-the-top threats, the so-called “Dismiss Polis” campaign announced they had less than half the required number of signatures to put a recall question on the ballot. And since they’re not even going to turn in the signatures they did collect for verification, the true total is likely far, far less.

In 2018 Colorado elected the first openly gay man governor in American history, elected an historically large progressive majority to the legislature, and swept the statewide races for attorney general, secretary of state, and treasurer. In 2019, your progressive majority got to work solving problems that have been overdue for solutions for years. The Republican minority obstructed progress the entire way, and threatened recalls in retaliation practically from the moment they lost the majority last November.

The defeat of the recall campaign against Gov. Polis is another sign that Colorado isn’t going back to the bad old days. Gov. Polis’ popularity easily outpaces every Republican in the state, the voting public overwhelmingly supports the legislation passed this year–and there’s much more progress to be made. Hopefully, “recall season” is about to be a thing of the past in Colorado, and thanks to everyone who has showed up at Our Colorado Way of Life actions to help out targeted lawmakers. With your help, this is a fight we’re about to win.

Here are more ways to get involved for the week of September 9:

Reproductive (Repro) Health Happy Hour is a monthly networking event for people working on sexual and reproductive health, rights, and justice, and issues of gender and sexuality, and all pro-choice individuals looking for fun and progressive drinking buddies. The event was founded in New York City in 2004 and has now spread to more than 30 cities worldwide.

Join local activists to make phone calls to fight back against the misguided recall of Leroy Garcia.
If you can, please bring your own laptop/iPad to use for virtual phone bank & cell phone, if you have one.
Looking forward to seeing you! Arapahoe County Dems & Indivisible

Public education voters across Colorado are ready to get out the vote for Prop CC. We know that our state’s education funding hasn’t met the U.S. average since 1982. Yep, 1982. Bring a friend and let’s dust off our 80’s gear and kickoff this campaign to help get our school funding into the 21st century. Join us to meet other public education voters, learn 1980s fun facts, find out what you can do to get involved (plus there will be appetizers, mocktails, and more!).

Join local activists to knock doors and make phone calls to fight back against the misguided, extremist-led recall of Sen. Leroy Garcia.

One Colorado: Speak Out: Centering Trans & Non-binary Voices in the Workplace

We’re coming together to voice our experiences and we want to see you there. Join us for drinks, appetizers, and storytelling as trans and non-binary folks share their experiences of coming out and navigating their identities in the workplace open-mic style. Right now there are three upcoming Supreme Court cases that could roll back federal workplace protections for LGBTQ+ people. Hear from ACLU of Colorado’s Public Policy Director, Denise Maes, and Colorado’s first-ever transgender Representative, Brianna Titone about the upcoming cases and how they managed to overcome obstacles and become LGBTQ+ leaders in the community.

Indivisible #DefundHate Every Corner Against Hate

Training is FREE but if you’re able please bring a donation for our host, the Metropolitan Community Church. This training will provide knowledge of basic Nonviolent Direct Action activities. Attendees will learn the meaning of Nonviolent Direct Action, how to participate in basic actions like a strike or a soft blockade, and other essentials. Learning will be participation-based so come prepared to try out some new skills and activities. All are welcome.

Where: Metropolitan Community Church of the Rockies, 960 N Clarkson St, Denver
When: Saturday, September 14 at 9:30am

Volunteer with One Colorado at Delta Pride

Pride season is here! Pull on a One Colorado t-shirt, sign up new supporters of LGBTQ equality, and join in the fun this summer. Delta Pride will be held on Saturday September 14th starting at 3pm at My Place, 1410 Valley View Dr. Delta, CO 81416.

Thanks again for your help with all of these events and actions. You make the difference week after week.