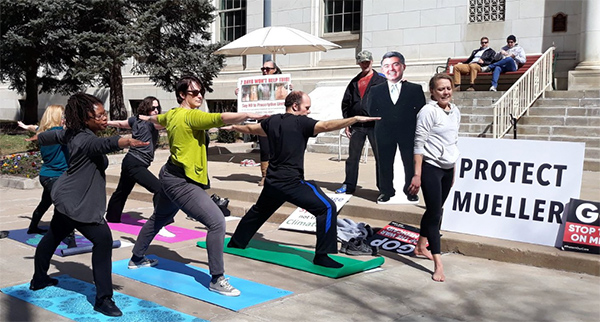 DENVER: Progressive activists and organizations gathered in front of Senator Cory Gardner’s office today to ask him to stand up for Colorado voters and stop avoiding critical issues like healthcare and the Mueller report. Rally participants followed the rally with a Yoga class interpreting Cory Gardner’s changing positions. Then this afternoon, Attorney General William Barr notified Congress that he has received Robert Mueller’s completed report on the investigation into President Trump’s campaign.

“Today Colorado progressives called out Cory Gardner on his yoga-like endlessly changing positions,” said ProgressNow Colorado executive director Ian Silverii. “The timing was perfect: after years of failure, Gardner has a chance now to finally do the right thing and demand the Mueller report is made public in its entirety. It is critical that the Justice Department publicly release the full, unredacted report so that wrongdoing by President Trump, his administration, or officials from his campaign can finally come to light. The time has come for Gardner to stop running cover for Donald Trump and let justice be done. The voters of Colorado are watching.”

A recent poll released by ProgressNow Colorado shows that a majority of Coloradans want to see the Mueller report. Public Policy Polling was conducted on behalf of ProgressNow Colorado in conjunction with Protect the Investigation between March 7-8. Results reflect the findings of 543 registered voters in Colorado using automated phone interviews.

Key findings from the poll show that:

● An overwhelming majority of those surveyed want maximum transparency when it comes to the full investigative results of the Special Counsel’s work.

○ 77% think the Special Counsel investigators should produce a full, public report on findings from their investigation.

○ 76% think Senator Cory Gardner should publicly support the release of a full, public report from the special counsel investigation.

● Most Colorado voters agree that the Special Counsel’s investigation has yielded results.

● There is an almost universal consensus among Colorado voters when it comes to holding the President to the same standard of justice as anyone else.

○ 86% agree with the statement that “no one is above the law, not even the President of the United States, and the American people deserve to know if President Trump or anyone in his inner circle committed crimes, obstructed justice, or threatened the rule of law.”