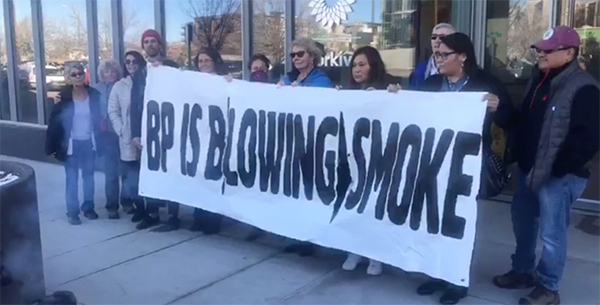 DENVER: ProgressNow Colorado, the state’s largest multi-issue progressive advocacy organization, joined with grassroots activists for a day of action outside the U.S. headquarters for BP in downtown Denver as the EPA held the only hearing on the Trump administration’s proposal to roll back the U.S. Environmental Protection Agency’s new source methane rule. BP had set goals to reduce methane emissions and signed a “Guiding Principles” document along with eight other companies almost a year ago agreeing to advocate for “sound policies and regulations on methane emissions.” Despite commitments, BP has failed to oppose the Trump administration’s roll back of the EPA New Source Performance Standards.

The activists highlighted this hypocrisy by running “smoke machines” outside the BP headquarters and holding a banner accusing BP of “blowing smoke” when it comes to supporting policies to reduce methane.

“BP should stand by their commitment to support common sense policies that cut methane, and oppose the Trump administration’s attack on the new methane rule. Without action, BP is simply blowing smoke instead doing the right thing on methane,” said Manuel Lopez del Rio of ProgressNow Colorado. “In Colorado we value our clean air and water and have adopted strong state-level rules to cut methane. However, pollution doesn’t stop at state lines which means that we need action at both the state and federal level.”

Methane is a greenhouse gas pollutant that is 80 times more powerful than carbon dioxide for the first 20 years it exists in the air. Methane is released from venting and leaks that occur throughout the oil and gas supply chain.

Just two years ago, BP moved their headquarters to Denver, which they claim was a result of shared environmental values with Colorado. However, ProgressNow Colorado pointed out that BP and the eight other companies that signed the “Guiding Principles” document not only failed to oppose the roll backs, their trade associations–including the American Petroleum Institute–have actually lobbied against the EPA new source methane rule.

The EPA is accepting comments on the methane new source rule roll back through December 17th. To date, neither BP nor any of the other companies that signed the “Guiding Principles” document has opposed the proposed rollback.