Taxpayers to the Oil & Gas Lobby: Time to Pay Your Back Taxes 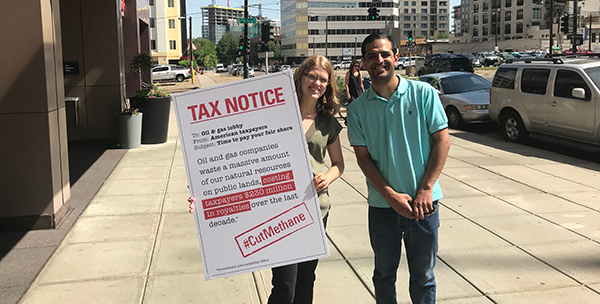 DENVER: With a billboard-sized “tax collection” notice in hand, progressive and conservation organizations led a day-of-action aimed at the oil and gas lobby in four states including Colorado, New Mexico, and Pennsylvania. Conservation Colorado joined ProgressNow Colorado outside the Western Energy Alliance offices.

“It is high time that oil and gas companies pay their fair share when developing taxpayer-owned resources on public lands,” said Manny, Strategic Engagement Director of ProgressNow Colorado. “Rather than fight common sense rules to cut natural waste and pollution, the oil and gas lobby should be supporting solutions that protect the health of our children, stop the needless waste of American energy, and generate tens of millions in tax revenue.”

More than 25.7 million acres of public lands are leased for oil and gas development in the U.S. including places such as Dinosaur National Monument. During development, oil and gas companies vent, flare, or leak millions of tons of methane which is the main component of natural gas.

With rare exception, the federal government does not collect royalties on wasted natural gas. In fact, the nonpartisan Government Accountability Office found that oil and gas companies could economically cut at least 40 percent of that waste and generate $23 million annually.

That lost revenue is why progressive and conservation organizations organized events across the country calling for the oil and gas lobby to pay “back taxes” for the $230 million in lost royalty revenue over the last decade due to wasted natural gas by their member companies.

The U.S. Bureau of Land Management (BLM) adopted the Methane and Waste Prevention Rule to cut that waste in 2016. After intense opposition to federal methane rules by the oil and gas industry, Interior Secretary Ryan Zinke moved to roll back the BLM methane waste rule. The agency recently closed a 60-day comment period where they failed to hold a single public hearing anywhere in the U.S.

In addition to methane, toxics such as benzene and other ozone-forming pollutants are released during the extraction process. Ozone, or smog, can trigger asthma attacks and worsen respiratory diseases such as emphysema.

“More than 400,000 Americans and thousands of Coloradans have voiced their support for federal rules protecting us from methane pollution,” said Jessica Goad, deputy director at Conservation Colorado. “Rolling back the Methane Waste Prevention Rule would result in more smog pollution threatening the health of our most impacted communities — like children, seniors, and communities of color — and it would be a huge step backward in the fight against climate change. The Western Energy Alliance and the oil and gas industry across the West need to stand up for our health and environment and stop this rollback of commonsense pollution safeguards.”