Yesterday morning on CBS’ Meet the Press, Sen. Cory Gardner was exposed for doing something terrible. 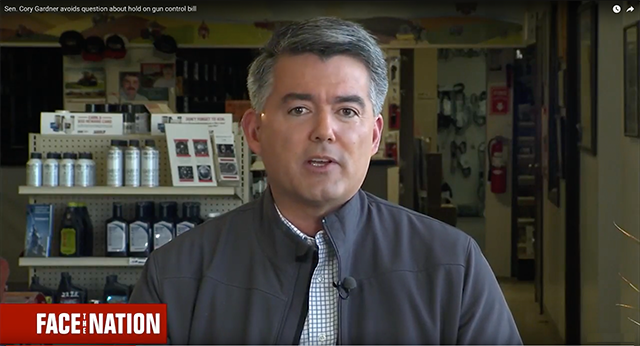 Unbeknownst to anyone, several weeks ago Sen. Gardner had placed a secret hold on legislation to strengthen background checks on gun purchases. This is legislation sponsored by a Republican Senator from Texas in the wake of the horrific Sutherland Springs, TX mass shooting that left 26 people dead.

That’s right—the Senator from Colorado, the state home to Columbine, Aurora, and the Colorado Springs Planned Parenthood shooting, is single-handedly blocking common sense, bipartisan legislation to stop guns from getting into the wrong hands.

We didn’t know Cory Gardner was the one blocking this common-sense bipartisan bill until yesterday when he was confronted on live, national television. But he got caught. Over 90% of the public supports stronger background checks. Gardner has taken almost $4 million from the NRA and the gun lobby throughout his career, and now he is using his power as a Senator to secretly block a bill even the NRA claims to support.

Cory Gardner has betrayed every victim of gun violence, in Colorado and across America, with his cowardly attempt to block even the most rudimentary improvements in gun laws. Action item #1 this week: call Sen. Gardner at (202) 224-5941, and tell him to immediately release the hold on Sen. Cornyn’s background checks bill. And tell him his continuing refusal to protect Americans from gun violence will be remembered when he’s up for election again in 2020.

Thanks for taking quick action to hold Cory Gardner accountable. Once that’s done, here are many more great ways to make a difference for the week of March 12:

ACLU of Colorado: People Power at The Capitol

Join us for Lobby Day, March 14th at 8am. Talk to your elected representatives about the need to protect civil liberties in Colorado. Free continental breakfast and lunch provided. This event is free and open to the public.

Women’s March Youth EMPOWER is calling for students, teachers, school administrators, parents and allies to take part in a #NationalSchoolWalkout for 17 minutes at 10am across every time zone on March 14, 2018 to protest Congress’ inaction to do more than tweet thoughts and prayers in response to the gun violence plaguing our schools and neighborhoods. We need action. Students and allies are organizing the national school walkout to demand Congress pass legislation to keep us safe from gun violence at our schools, on our streets and in our homes and places of worship.

Unity Across Struggles: A Black and Brown Conversation

Join this community conversation on how Latinos and African Americans in Denver might disrupt the status quo, smash the pattern of “fighting for the top of the bottom” and unify across struggles for shared political and economic power.

Colorado Jobs with Justice: The Hand that Feeds Documentary Screening

Join Colorado Jobs With Justice for a screening and discussion of “The Hand that Feeds,” the moving story of undocumented immigrants fighting to win a union at a bakery in New York. “Shy sandwich-maker Mahoma Lopez unites his undocumented immigrant coworkers to fight abusive conditions at a popular New York restaurant chain. The epic power struggle that ensues turns a single city block into a battlefield in America’s new wage wars.”

We would like to unite Jeffco together for a rally to demonstrate our unity in working together to end school violence. This rally is organized by Jeffco students and we are inviting ALL Jeffco students, staff and families to join us for a night of speakers, performers and action! We are inviting political officials and Jeffco school officials to come and hear our voices! After the rally we invite everyone to join us in taking action! We will have action tables where you can sign up to vote, write letters to your officials, write letters of encouragement to MSD and other schools affected by violence, film your #Whatif video and much more! Spread the word and join us!

An Evening with Jeanette Vizguerra

The CU Denver Masters of Humanities/Masters of Social Science Program and Interdisciplinary Studies present the 3rd Annual Colorado Critical Interdisciplinary Speaker Series, featuring Jeanette Vizguerra, who Time Magazine named one of the “100 Most Influential People of 2017.” Ms. Vizguerra will deliver a talk about her life experiences in the United States entitled “Immigrant Mother and Leader in the Global Struggle to Keep Families Together”. This talk will be a bilingual event delivered in both English and Spanish, and it is free and open to the public.

What does the recent announcement from AG Sessions to rescind the Cole memo mean for State regulated Cannabis companies here in Colorado, or one of the other 30 states in the union with decriminalization laws?

The One Colorado GSA Network will be hosting the Northern Colorado GSA Leadership Summit on March 17th! At the 2018 Northern Colorado GSA Leadership Summit, we will share best practices for creating and supporting effective GSA programs and empowering lesbian, gay, bisexual, transgender, and queer students to be leaders in their community. Students (middle school, high school, and college-aged), educators, and parents who are passionate about creating safe, inclusive learning environments are all welcome and encouraged to attend. This is a FREE event and this year’s theme is ‘It Starts With Us’ to remind us that we all have the power to make change in our community.

What is Islam? Who are Muslims? Ask questions! get answers!

Ban bump stocks in Colorado! Join us at the Colorado Capitol, Rm. 357. Come to testify and support. Wear RED! You may come or leave at any time but should get there early to sign up if you plan on testifying! SB18-051 “Prohibit Multi-burst Trigger Activators” is the first bill on the docket and will be heard at 1:30. If you can, stay to testify against SB18-052 “Repeal Ammunition Magazine Prohibition.”

Whether’s it’s holding Cory Gardner accountable in Washington or making sure our values are represented at the state capitol in Denver, thanks again for all your help week after week fighting back against the Trump and the far fight. We are on the right side of history, and we are winning. We’ll be back next week with more ways to take action.