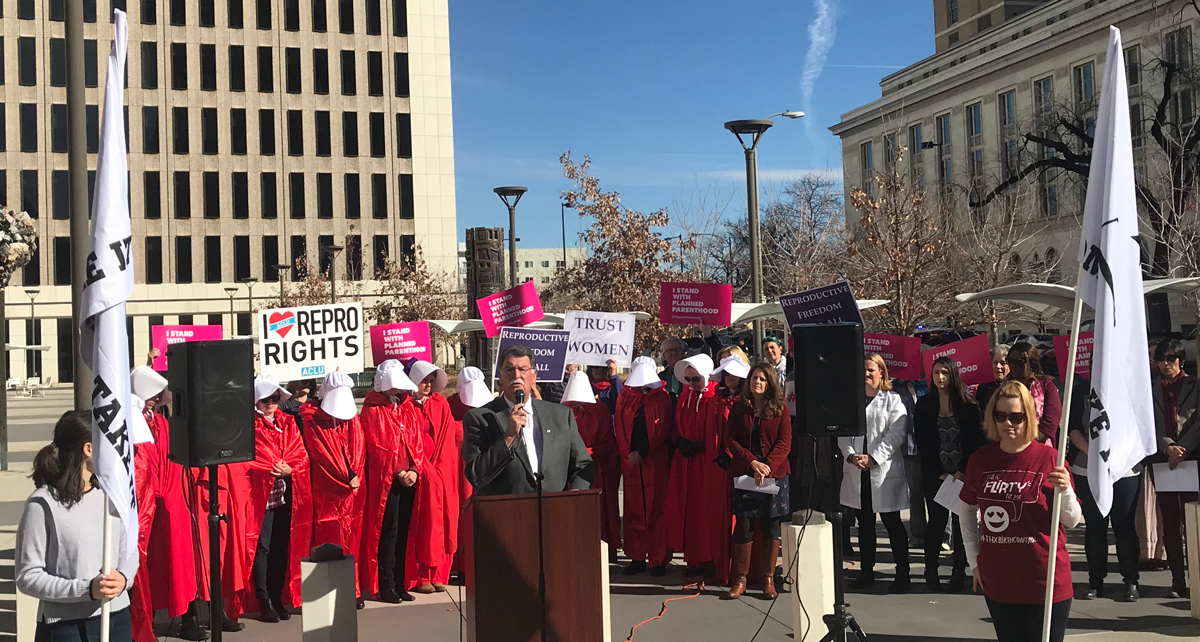 DENVER: Coloradans filled the streets in downtown Denver today as part of rallies in numerous major cities across the nation in opposition to the recent decision by the Department of Health and Human Services to allow almost any employer to eliminate contraceptives from employee health coverage. ProgressNow Colorado, the state’s largest online progressive advocacy organization, joined with NARAL Pro-Choice Colorado, Planned Parenthood of the Rocky Mountains, the Colorado Organization for Latina Opportunity and Reproductive Rights (COLOR), the American Civil Liberties Union, the Interfaith Alliance, Indivisible Denver, Indivisible Front Range Resistance, New Era Colorado, C.A.P.E. Denver, Together We Will, concerned residents, and elected officials on both sides of the aisle to rescind this order and ensure women stay covered.

“Men and women, Republicans and Democrats, communities of faith from across Colorado all say with one voice that access to birth control is off limits to cynical DC political games,” said Sen. Kerry Donovan of Vail. “Contraceptive coverage as mandated by the Affordable Care Act has helped to reduce the rate of unintended pregnancy in Colorado and throughout the nation. The public health benefits of contraceptive coverage have been proven again and again, but more importantly, people have a fundamental right to access contraception within the health coverage they already pay for.”

“Since the beginning of this new administration, American lives have been at stake,” said Rev. Tammy Garrett-Williams. “The Affordable Healthcare Act otherwise known as Obamacare has been threatened from every angle. Now we’re here to defend women and teen girls who are being affected by taking away basic care when it comes to prevention of unplanned pregnancies. There is no mention of abortion in our Bible anywhere, but there is clear reference to not judging another person—spoken specifically by Jesus. This decision takes a judgmental action by implying that women are not capable of making decisions with their own bodies. This decision will cause more problems by increasing unwanted pregnancies and abortions. Take your hands off our birth control!”

“Increasing access to reproductive health care means access to birth control,” said Adrienne Mansanares of Planned Parenthood of the Rocky Mountains. “It is unconscionable that a woman’s decision to access birth control can now be made for her by her boss. This is a message to American women that they can’t be trusted to make their own health care decisions, and must get permission from an authority figure first. Nothing should come between women and the health care they need.”

“Colorado is an incredible success story when it comes to reducing the rate of unintended pregnancy through access to contraceptives,” said Taylor Holden of ProgressNow Colorado. “Part of that success has been the requirement that employers offer contraceptive coverage as part of every insurance plan. We know from experience in Colorado that having access to birth control leads to better planning, happier children, and stronger families. We’re calling on HHS to immediately rescind the new policy allowing almost any employer to end contraceptive coverage. Colorado knows what success looks like, and we don’t want this.”

For more information on today’s rally in Denver and other major cities across the nation, click here.