Colorado Progressives “United in Orange” In Support of Free Speech 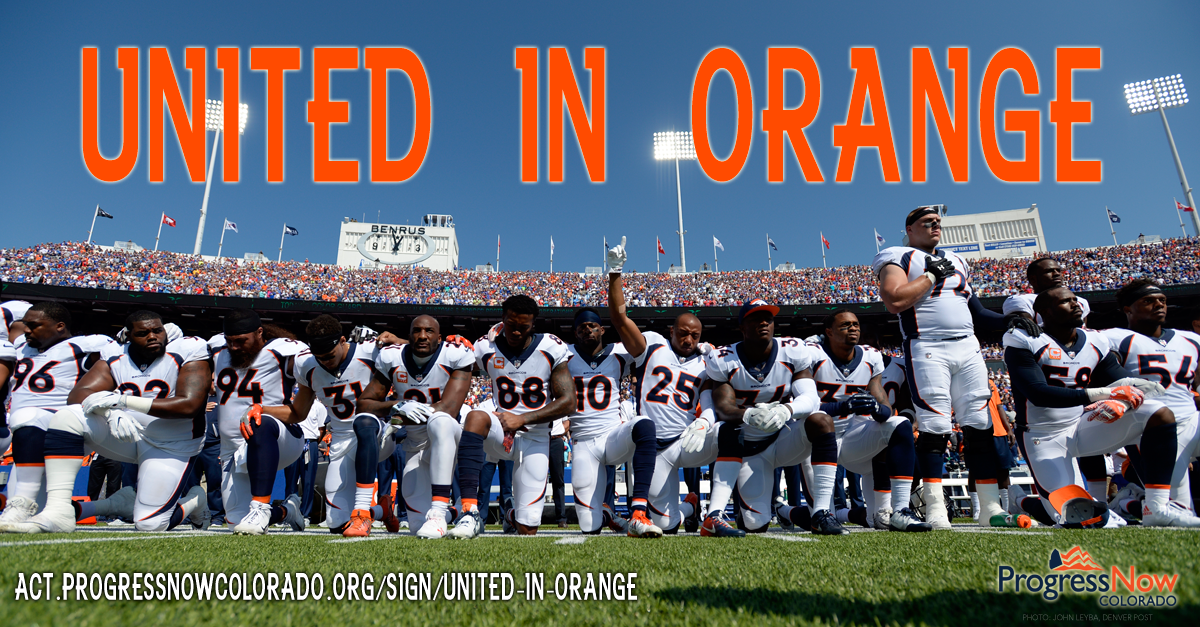 DENVER: With the division arch-rival Oakland Raiders suiting up to take on the Denver Broncos in Denver this afternoon, ProgressNow Colorado, the state’s largest online progressive advocacy organization, delivered messages from members across the state thanking players for standing up to Donald Trump’s irresponsible threats—and management of the club supporting the free speech rights of their players.

“The outpouring of support from Coloradans for the NFL protests after Donald Trump derided players for exercising their right to free speech has been powerful and encouraging,” said ProgressNow Colorado executive director Ian Silverii. “Players are rightfully demonstrating so that this country will wake up and see the structural and systemic inequalities and brutality that people of color face every day in America. Trump threatening those players threatens the most fundamental rights we all cherish as Americans. It was Trump’s escalation that prompted dozens more NFL players, including a majority of the Denver Broncos, to take a knee during last week’s national anthem.”

“Love of country means respecting the right of every American to disagree and to demonstrate,” said Silverii. “After last weekend, we asked our members to sign a thank you petition to the Broncos and send messages of support to the players. Nearly a thousand Coloradans responded. It is up to individual players to choose when and why to take a knee—but when they do, Coloradans have their back.”

Here are just a few of almost 1,000 responses to ProgressNow Colorado’s petition in support of the Denver Broncos:

Caitlin in Boulder: “We stand with the Broncos! Black lives matter, and until the rest of the country begins to respect the humanity of all of its citizens, we are not equal and America is not indivisible, with liberty and justice for all. Please keep protesting–we’re with you.”

Sarah in Denver: “Thank you for having the courage of your convictions and for taking this action to highlight brutality toward African Americans and other minorities.”

James in Peyton: “This is one old white man who supports all the Broncos who took a knee. I believe in your right to free speech and agree 100% that our President is a ninny and racist pig. Also told Phil Long Ford if they don’t want to work with Von or Brandon, then I will never buy a car from them again.”

Julianna in Elizabeth: “Peaceful, respectful protest is exercising our 1st Amendment rights. Our troops fight for our rights. This country has moved forward towards a more perfect union by protesting for what is right. Against a king, against taxation, against slavery (we even fought a war). Against segregation, against Jim Crow. It’s how we bring attention to what is wrong in society. It’s how we become a better and more just society.”

Patricia in Denver: “I support the rights of our Bronco players to express their deep concern over the direction our country is taking. I thank you for your courage. The biggest threat to the flag and what this country should stand for is sitting in the White House.”

Melissa in Denver: “Thanks for using your respected voices to call for real and immediate action to acknowledge and redress the inequalities in American society. I’m not a football fan usually, but I am now definitely a Bronco fan.”

Natalie in Colorado Springs: “Thank you to all of our players, both those that chose to take a knee or continue to stand with hand over heart. It’s also about respecting people’s choices and their rights to make those choices and enact them!”

Brent in Colorado Springs: “Thanks from an old white guy who isn’t Donald Trump. Would that your courage and concern for our society could rub off on our president.”

Amanda in Pueblo: “My husband and I absolutely support the message and stance you took on September 24th and are proud to be Bronco fans because of it!”

Stefan in Vail: “Keep taking a knee until we can all stand united and equal.”

Thomas in Palisade: “I am solidly behind you. Our veterans did not fight for a ‘flag’, they fought for our rights, including the 1st Amendment.”

“Don’t believe the hype: in Colorado, where the sunsets are orange and blue for a reason, we back the Broncos and we support the civil rights that make America great,” said Silverii. “When history records the story of the NFL players who took a knee to call out racism, there’s no question about who will be seen as being on the right side of this. Go Broncos.”