What you can do to fight back this week (July 31)

You beat them again.

Late last week, the far right’s latest attempt to repeal the Affordable Care Act failed. Three Republican Senators—Sen. Lisa Murkowski of Alaska, Sen. Susan Collins of Maine, and Sen. John McCain of Arizona—listened to their constituents, stood up to Donald Trump’s threats, and stopped their colleagues from passing a bill that would have hurt millions of Americans.

Meanwhile, Sen. Cory Gardner of Colorado spent the last week in hiding, falsely telling the press he was “undecided” about legislation he claimed to have helped write. When it came time to vote on health care, Gardner broke every promise he made to Colorado voters. Gardner voted for legislation that would hurt Medicaid patients after he promised not to. He voted for repealing the Affordable Care Act without a replacement—after he said he wouldn’t. And he even voted for a bill budget experts say would hike premiums by 20% or more—the one thing Gardner said he wanted to avoid. 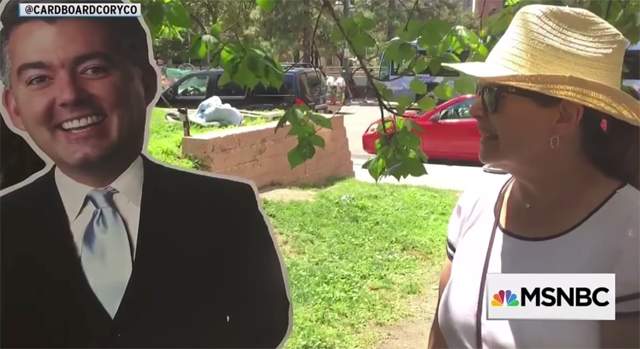 Since Cory Gardner refuses to show his face to his own constituents to answer for his terrible votes, Cardboard Cory is taking over the job! If you attended this weekend’s big rally in City Park, you might have already had the chance to make your voice heard to a Senator who listens and is actually willing to be seen in public with you. Watch the story from MSNBC’s Rachel Maddow above, then click here for your chance to catch up with Cardboard Cory in the coming weeks. Unlike the real Cory Gardner, he’ll be everywhere during the upcoming August congressional recess. Click here to learn more.

In all seriousness, Gardner’s approval rating in Colorado has plunged to career-ending lows. Gardner’s refusal to speak to his constituents about health care since Trump took office, followed by votes breaking all of his promises to protect Coloradans, have destroyed Gardner’s credibility. Politically, Gardner is toast—and you are the reason why. Gardner’s stunning fall in 2017 is a warning to other politicians who are ignoring their constituents and putting politics ahead of lives and health. And now, it’s up to all of us to make sure no one forgets when Cory Gardner has done.

Thanks again for everything you’re doing to fight back. Here are more ways to take action for the week of July 31st:

Education 411: What We Need to Know

Join a community event focused on providing tools for parents to be advocates, supporting the voice of parents and youth, and elevating the lived experiences of those in the educational system. At this event we will hear from parents, teachers, and youths about their experiences, learn about the Colorado early and k-12 education landscape, and participate in table top discussions about topics important to our lives. At the end of the event, attendees with have their own tools to be an advocate for their children and selves, and hear action steps from local officials.

Grab a beer, enjoy summer snacks, and get to know the Democratic candidates for Attorney General. Candidates will give short speeches early in the event, so get there early. After speeches, candidates will be available for conversations. Candidates will ALSO bring their favorite homemade summer dish for guests to try and judge! Does a good coleslaw = a good AG? We will see!

At Chinook Fund, we strive to fund grassroots social justice and community organizing, and want you to hear directly from the community organizers and social justice advocates who are leading the way towards progress and systemic change. We are holding the Grantee Panel in the Posner Center Commons on Wednesday August 2nd from 5 to 8 PM to provide an opportunity for the general public to engage with our grantees and hear about the movement building they are doing to advance equality and progress throughout the state of Colorado. What are challenges that come in organizing? What are their strategies in creating system change? What does movement building and organizing look like in the different communities they serve? How do different organizations build power in the communities they work in? These themes and more will be covered in our panel.

Generation Latino, Learn what we do!

We are Generation Latino. We want to elevate young Latino voices to address the pressing issues in our communities. Join us to learn more about how we do the work we do and how you can participate.

Suncor is a large refinery in Commerce City that produces gasoline, diesel fuel, and paving-grade asphalt. Suncor’s emissions make it one of the largest sources of air pollution in the Denver-Metro area, and is the largest emitter of hazardous air pollutants in Globeville and Elyria Swansea, neighborhoods prodominately populated by low-income families and people of color. Suncor is currently trying to modify their permits to allow for more emissions but their requests must be approved.

Fact vs. Fiction: Election Integrity in the US

The Presidential Advisory Commission on Election Integrity was established earlier this year to investigate claims of “voter fraud, improper voter registration, and voter suppression”. The commission recently requested voter information from states around the country–resulting in thousands of Coloradans cancelling their voter registrations. What is the goal of this commission? What do they plan to do with voters’ information? And what are states, advocacy groups, and individuals doing in response?

Monthly networking event at The #AllianceCenter! No RSVP required, come on in!

Drokpa: Climate Change and the Indigenous Nomads of Tibet

Learn more about indigenous peoples from Tibet and take part in an important conversation about how we can honor and serve native communities in this day and age. Join members of Boulder’s Tibetan community in this special screening of the documentary Drokpa, documenting the lives of the Drokpa nomads of Tibet. The film’s producers Yan Chun Su and Dolma Kyab will be with us in interactive conversation circles after the screening when we can share our reaction to the film’s message, as well as our collective thoughts and hopes for Indigenous People everywhere.

The NAACP Pueblo Branch, The NAACP State Conference & The Center for Responsible Lending cordially invite you and your family to a Community Conversation on Economic Empowerment and Predatory Lending: how payday loans and student loans impact our families.

Volunteer with One Colorado at Aurora Pride!

Flip-flops. Shades. Farmer’s tan. Oh my! Pride season is here! Pull on a One Colorado t-shirt, sign up new supporters of LGBTQ equality, and join in the fun this summer. Come volunteer with One Colorado at Aurora Pride!

Where: Aurora Municipal Center
When: Saturday, August 5 at 9:30am

A Kiki to End AIDS

We are excited to announce that Dr. Timothy E. Tyler, Pastor of Denver’s Oldest Black Church, Shorter Community AME Church has organized this event on August 6th! Their church has committed itself to fighting for social justice issues in Denver. Dr. TYLER along with other community members believe in The fight to preserve and improve the Globeville, Elyria-Swanse Community. They also believe that the city’s efforts to widen Highway 70 will destroy what is already a fragile community. On Sunday, August 6, 2017, @ 10:00 AM Many of our Community Partners from various organizations such as Denver Indivisible will be joining us in worship so that we can thank them for their partnership.

Indivisible on the Local Level: Education & DPS Board Election

In preparation for the November 2017 Denver School Board election, Indivisible Denver and Indivisible Front Range Resistance invite you to engage in a discussion about education in Colorado. The first place to fight Betsy DeVos’s destructive federal education policies is in getting the right people on our school boards locally!

Thanks again for everything you do week after week to fight the Trump administration and the far right from Denver to D.C. Even after these victories on health care, we’re not out of the woods yet—and once this battle is over others are waiting to be fought. Watch this space for updates, and we’ll see you next week.