What you can do to fight back this week

Today, as you probably already know, Neil Gorsuch was sworn in to serve on the U.S. Supreme Court. Neil Gorsuch is from Colorado, but his record stands in opposition to the values we care about as Coloradans. Gorsuch’s confirmation is a disappointment, and we can only hope that the grave concerns Americans have expressed about Gorsuch’s judgment are proven wrong.

But it could have been even worse. Sen. Michael Bennet of Colorado faced intense pressure to support Gorsuch. Elites from both parties, local newspapers, and millions of dollars in ads urged Bennet to vote yes on Gorsuch’s confirmation. In the end Bennet voted against filibustering Gorsuch, hoping to defend the Senate against the so-called “nuclear option.” It was a symbolic vote, since Democrats already had the voted they needed to filibuster and Republicans had already decided to use the “nuclear option” to force a vote on Gorsuch’s confirmation.

Despite all the pressure on Bennet to back a fellow Coloradan, he did the right thing and voted against Gorsuch’s confirmation. Bennet’s vote against Gorsuch proved he puts Colorado values before political expediency. On a day that was bound to disappoint, Bennet did something you can be proud of. And it’s the direct result of actions you took to oppose Gorsuch in his home state. 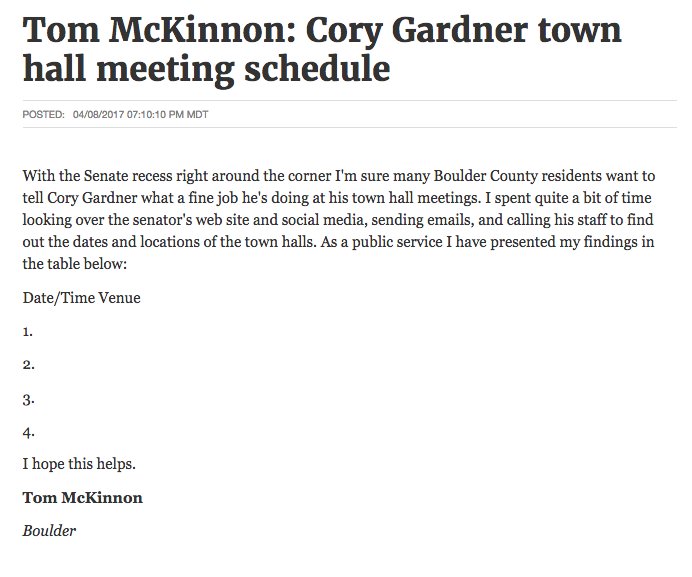 We’ve got to keep the pressure on our lawmakers. Congress has adjourned for a two-week Easter recess. Cory Gardner continues to hide from his constituents, but other representatives have announced public hearings. It’s vital that Coloradans make their voices heard in these two weeks before lawmakers go back to Washington, where Trump’s destructive budget and many other challenges await.

Here are ways for you to fight back for the week of April 10:

You are invited to join our partners, community leaders, advocates, and volunteers as we come together on the steps of the Margaret Carpenter Park Amphitheatre on Monday, April 10th, 2017 from 5:30 – 6:30pm, to declare April Child Abuse Awareness & Prevention Month. Stand up for the children in our community, make their voices heard, and join in envisioning a bright future for every child.

The Distinguished Speakers Board is pleased to announce a free community event this Spring: The Death Penalty Project. Parvais Jabbar and Saul Lehrfreund will speak on April 10th at CU Boulder’s Wittemyer Courtroom in the Wolf Law building. Doors will open at 6:30 p.m. and the event will begin at 7:00 p.m. There will be a Q&A portion with the audience following the event.This is a concurrent event with the Conference on World Affairs.

Trump, Russia and the Panama Papers

Join us Monday, April 10 at 7:30 p.m. as Kevin Hall, the national economics correspondent for McClatchy Newspapers, talks about his work covering the “Panama Papers,” the huge leak of files detailing how the wealthy use offshore structures to avoid paying taxes in their home countries. McClatchy was the only U.S. newspaper partner during the yearlong, global investigation. Hall’s Panama Papers work has already won awards from George Polk, the Overseas Press Club, SABEW Best In Business, Scripps Howard, Online Journalism Association, Barlett & Steele and the American Society of Newspaper Editors.

Family and Medical Leave Insurance Act (FAMLI) HB17-1307 is introduced! FAMLI Act is significant! The United States is the only industrialized country in the world without paid family leave. We are thrilled that Representative Faith Winter has sponsored the bill again and is leading with a Colorado solution to ensure the well-being and financial stability of working families.

The first Resistance Recess in February was a huge success, and constituent activity has been widely credited with building the power to stop Trump and Ryan from taking away our health care. As Trump remains under investigation and as Congress continues to push Trump’s unconstitutional and dangerous agenda, we must make sure that no one allows the passing of time to normalize this president and his harmful policies.

Durango Protest Against the Bombing of Syria

No Justice No Peace!

This Spring #NoDAPL water protectors and the Water Protector Anti-Repression Crew will be facilitating trainings across Turtle Island sharing knowledge about resistance to the grand jury convened against water protectors at Standing Rock. We want to build our capacities for strong movement defense against state repression.

NO to Right to Discriminate Bill – Call Night

Join us at the One Colorado office to call our supporters about LGBTQ equality. The Colorado Legislature introduced a bill this week that, if it became law, would legally allow discrimination against the LGBTQ community. Senate Bill 17-283 would allow businesses and individuals to claim that any belief they hold gives them permission to exempt themselves from non-discrimination laws they don’t want to follow.

Strengthening Democracy Colorado and the Denver branch of the Tax March for Donald Trump’s Tax Returns is putting on a special show at the Oriental Theater filled with several of the top comedians around Denver! Joining us for the show are comedians Zac Maas, Christie Buchele, Harry Baber, Conner Roma, and Alan Bromwell!

Join ACLU of Colorado at the Colorado State Capitol for our Women & Families Wednesday!

HB17-1256 requires oil and gas operations yo be 1000′ from school property line. If it is good enough for marijuana dispensaries, oil and gas should be held to the same standard. The hearing will be in room 357 upon adjournment which should be around 10 am.

This Wednesday, April 12th, the State, Veterans, and Military Affairs Committee of the Colorado Senate will consider a Right to Discriminate bill that would let individuals and businesses claim ANY of their personal beliefs — including religious beliefs — allow them to refuse to follow non-discrimination laws they don’t like. Join us for a press conference in the West Foyer of the Colorado State Capitol at 12:20 p.m. with a coalition of Colorado business owners, faith leaders, and community groups.

Right-wing Rep. Mike Coffman is holding a town hall meeting to discuss “all of the critical issues facing our community, state, and nation.” This event is open to residents of Coffman’s district only and registration is required.