What you can do to fight back this week

I would like to receive emails with this information in the future.

“The pressure is working.”

For almost two months, Coloradans have been turning out by the thousands to hold President Donald Trump and right-wing Sen. Cory Gardner accountable for the steady stream of bad news about what’s happening in Washington. 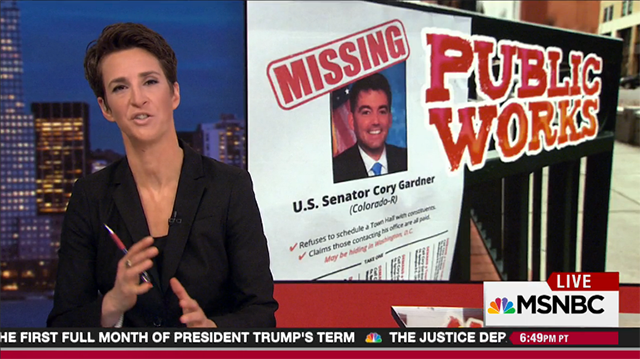 Friday evening, Rachel Maddow of MSNBC recounted in detail the enormous success of the protests in Colorado against Trump and Gardner. When this began in January, Cory Gardner called the citizens gathering outside his offices “paid protesters.” Gardner told Coloradans to “not be afraid” of Trump’s agenda. And he assured us that the Trump/Gardner plan to repeal the Affordable Care Act, a.k.a. Obamacare, was in our best interests.

Today, Cory Gardner is singing a very different tune. Instead of telling Coloradans to “not be afraid,” Gardner leads off every speech now with issues on which he and Trump don’t agree. After making the promise to repeal Obamacare a central plank in his campaign, Gardner suddenly claims to be worried about Medicaid recipients in Colorado who could lose care.

We still don’t know how Gardner is going to vote. But we know that the protests are working. We know that Gardner would not even be paying lip service to these issues if not for the protests he has faced at home. What we are doing to fight back against Trump is not in vain, and once again Colorado is being held up as a model. Thank you–and keep fighting!

Here are things you can do to fight back this week:

Call to Action! It is time to take action against unconstitutional Federal overreach that will adversely and dramatically impact Colorado residents and law enforcement. On the 16th the Ralph Carr Freedom Defense Act brought by Representative Salazar and Representative Esgar will be heard in the Judiciary committee. At 12pm there will be a press conference on the west steps of the capitol.

Join us for this unique opportunity to experience democracy in action! State and local leaders will be meeting with young voters to talk about important issues and focus on solutions. Colorado Secretary of State Wayne Williams will open the event speaking about the importance of youth civic engagement. The evening will then turn to a panel of state and local elected officials discussing issues important to Colorado youth and fielding questions from youth in the audience. RSVP to join us for this unique close up with Colorado elected officials.

Republican’s foolish attempt to replace not repair the Affordable Care Act will deny health coverage to MILLIONS! Even Cory Gardner has his doubts! Why do they hate the poor and aged among us? At the same time, we are still mystified by Trump’s curious Russian connections. The swamp just gets deeper and deeper. Join us to raise our voices and #ResistTrumpTuesday!

Join us at the Colorado State Capitol to advocate for museums. Set-up one-one-one meeting with local legislators or museum advocates. Then, attend a cocktail reception at the Denver Museum of Nature and Science Wednesday evening. Enjoy cocktails, appetizers, presentations by museum professionals and legislators.

Jose Antonio Vargas – “My Life as an Undocumented American”

Jose Antonio Vargas is a Pulitzer Prize-winning journalist and filmmaker whose work centers on the changing American identity. He is the founder of Define American, a non-profit media and culture organization that seeks to elevate the conversation around immigration and citizenship in America. In 2015, MTV aired White People, a television special he directed on what it means to be young and white in America as part of its “Look Different” campaign. In February 2016, Jose launched #EmergingUS, a multimedia news platform he conceived focusing on race, immigration, and the complexities of multiculturalism. At the University of Colorado Boulder, Jose will speak about his experience as an undocumented immigrant in America and as an immigration reform activist, exploring one of the most divisive questions facing our country today: how do you define “American”?

Women’s Health, along with our partners in the Colorado Reproductive Freedom Coalition, will lobbying for legislation to promote reproductive choice and access to healthcare, and urging legislators to oppose legislation limiting our reproductive rights and freedom. Please join us! RSVP required for this event.

Stand Up for Climate: An Experiment with Creative Climate Comedy

Humor is a tool underutilized in the area of climate change; yet comedy has power to effectively connect people, information, ideas, and new ways of thinking/acting. This event will feature a range of comedic approaches, including stand-up comedy, sketch and situational comedy, and improv.

Where: TBA, University of Colorado, Boulder
When: Friday, March 17, 5:00pm