What you can do to fight back this week (March 6th)

I would like to receive emails with this information in the future.

For weeks, concerned citizens across Colorado and the nation have turned out in massive numbers to voice our concerns about the direction of our country under President Trump. 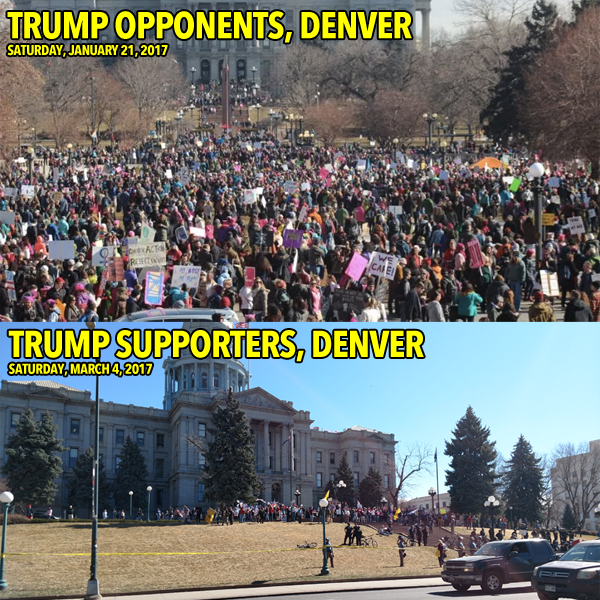 And it was a flop.

Pro-Trump rallies failed across America to attract anything close to the crowds who have showed up week after week to stand up to Trump and the Republican-controlled Congress. The opposition to Trump is so much stronger than what the “Tea Party” did to oppose President Obama back in 2009. Today it is the educated rising up, not the ignorant. Today communities are rallying to unite in common defense and common values–not bigotry, division, and fear.

As President Obama said in 2008, “we are the ones we have been waiting for.” Everything you are doing to stand up for progressive values and to call out Trump’s errors is helping our country get through this. Your letters, your phone calls, your donations, your attendance at events. They all matter. And you will look back upon these crazy days proudly knowing that you did not stand idle when our values as a nation were tested.

Here are ways to fight back for the week of March 6th:

Come join us in urging city council to vote “NO” to the sit-lie ban. We will gather in peaceful protest from 5-6pm in front of city hall, and then we will speak out against the ordinance when it comes up on the agenda (6:30 or so). Come and participate in whichever way you are comfortable. Please visit fccan.org/fchc for more info or contact info(at)fccan.org. Thanks!

Yes, it’s true….we are finally at the first vote stage of the Climate Bill of Rights. Tuesday, March 7 will be an historic evening. Please come to show your support, or to speak for 3-5 minutes on why you do not want drills and pipelines in your community. Note that we will be meeting in the Lafayette Library as we are anticipating a large turnout.

Women’s Lobby of Colorado and Bell Policy Center are proud to host a Women and Families’ Wednesday on March 8th at the Colorado Capitol. Which also happens to be International Women’s Day! We will be talking to Colorado legislators about bills that matter to women and families in Colorado. Including HB1195 which would exempt children’s diapers from the state income tax. The bill will be up on committee that day too. We hope you will join us!

Join FRESC & Colorado People’s Alliance on March 8th to demand that Disney CEO Bob Iger, step down from Trump’s Economic Advisory Council. The current administration has a Business Advisory Council that is comprised of large corporations and businesses like Walmart, JP Morgan and GM (to name a few). And a significant number of employees are immigrants, refugees and/or victims of inhumane labor practices. We just got word that next Wednesday, March 8th, Disney will be holding their shareholders meeting downtown Denver and that CEO, Bob Iger recently accepted a new position on the council.

The Watcher’s Silent Vigil for Liberty, Justice and Human Rights

The Watchers invite you to join in a silent march around the Capitol in powerful and peaceful silence in support of Liberty, Justice and Human Rights for All. By marching around the Capitol, we will be letting our elected officials at every level of government know that we are watching and will be engaging with them to ensure the preservation of our democracy. The Watchers were started by a group of Denver women inspired by the Women’s March in January and by the Madres de la Plaza de Mayo in Argentina who walked together for years in honor of their disappeared children.

A Day Without A Woman – Denver

On March 8th we will once again honor and join forces with those that are organizing the International Women’s Strike…our demand is simple…Equal Pay for Equal Work. Here in Denver we will have a Silent March on the Capitol, Free Self-Care Workshops and Coaching, and encourage women to get together for a Girl’s Day spent doing what they love.

When: Wednesday, March 8, all day

The Science of Resistance

Join us on March 8th as we break down the science of resistance and apply it to the causes we care about most. We’re convening a panel of experts to dig into the data about what works and what doesn’t in social movements, political campaigns and other large-scale efforts to transform society.

We are holding a rally outside the Denver office of Senator Gardner to tell him that climate change legislation is important to the students of Colorado, and that we do not want to see them repealed. Please join us! If you are unable to attend the event in person, feel free to make a phone call. The number for Gardner’s office is 303-391-5777.

The Standing Rock Sioux Tribe and Indigenous grassroots leaders call on our allies across the United States and around the world to peacefully March on Washington DC. We ask that you rise in solidarity with the Indigenous peoples of the world whose rights protect Unci Maka (Grandmother Earth) for the future generations of all.

We Are One Colorado Tour: Durango

One Colorado is bringing our “We Are One Colorado” tour to 13 cities across the state to talk about how to build on — and protect — our victories and continue to advance equality for all lesbian, gay, bisexual, transgender, and queer Coloradans and their families. One Colorado will also present the findings of their statewide LGBTQ needs assessment that was conducted in 2016.

On Saturday, the We Are One Colorado Tour will arrive in Telluride. Click here for more information.

Join us on March 11 for a livestream viewing of the ACLU’s launch of People Power. We’ll watch the Resistance Training live and talk about next steps for organizing to resist Trump’s attacks on our basic freedoms.