A right-wing rollercoaster in Colorado 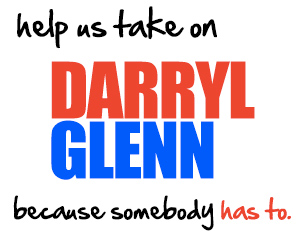 For months, we’ve been warning you about the far-right U.S. Senate campaign of Tim Neville.

This weekend, everything changed. In a stunning defeat, Neville was eliminated from the 2016 ballot by Colorado Republicans, after a virtually unknown candidate named Darryl Glenn brought the conservative party faithful to their feet with a rousing speech.

As of today, Darryl Glenn is the most dangerous man in Colorado politics. Glenn is even more extreme than Tim Neville. Glenn has vowed to “defund or basically repeal every executive order that President Obama issued.” Glenn is so far out of the mainstream that he calls Donald Trump a “patriot,” and claims he would not even support Mitch McConnell as the GOP’s leader in the U.S. Senate.

Today’s broken Republican Party can’t stop extremists like Darryl Glenn, so it’s up to us. Donate $10 to ProgressNow Colorado right now and help us get the word out about Glenn before it’s too late.

In yesterday’s speech, Glenn actually said he is “tired of hearing that Republicans need to reach across the aisle.” At a moment in history when we need leaders willing to come together and do the right thing for our state and nation, Darryl Glenn would be a complete disaster.

Thanks for doing your part to help us hold our leaders accountable–no matter what happens next.