Madness from Trump to Tancredo 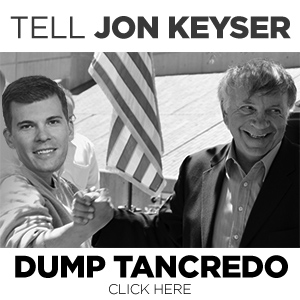 In only a few months, Donald Trump has morphed from a sideshow into the greatest threat to American values in modern history. Trump’s rise to dominance as the Republican presidential frontrunner raises grave questions about that party’s core values, and threatens permanent damage to America’s moral leadership on fundamental human rights issues from immigration to religious freedom. The threat Trump poses to our nation is like nothing seen in our lifetimes.

We’ve got a problem in Colorado, too. Help us stop the racist radical right today.

Former state Rep. Jon Keyser, now a candidate for the U.S. Senate, announced yesterday that he is joining forces with Colorado’s most extreme anti-immigrant radical politician, ex-Congressman Tom Tancredo. Like Donald Trump, Tom Tancredo’s racism has no place in any responsible political campaign. That’s what I told the Denver Post yesterday:

“For Jon Keyser to celebrate the support of a racist demagogue like Tom Tancredo raises very serious questions about Keyser’s integrity,” said ProgressNow Colorado political director Alan Franklin in a statement. “Either Keyser shares Tancredo’s racism, or he is a liar willing to say anything to win an election.”

It may be too late to stop Donald Trump from taking over the national Republican Party, but Coloradans of all political stripes have an obligation to call out Tancredo’s hateful and divisive politics.

Send a message right now: tell Jon Keyser to apologize for joining forces with Tom Tancredo. We’ll deliver your names and comments to Keyser’s campaign, the press, and other elected officials.

Thanks for standing up for common decency in Colorado politics. Let’s be an example to the rest of America in these troubled times.