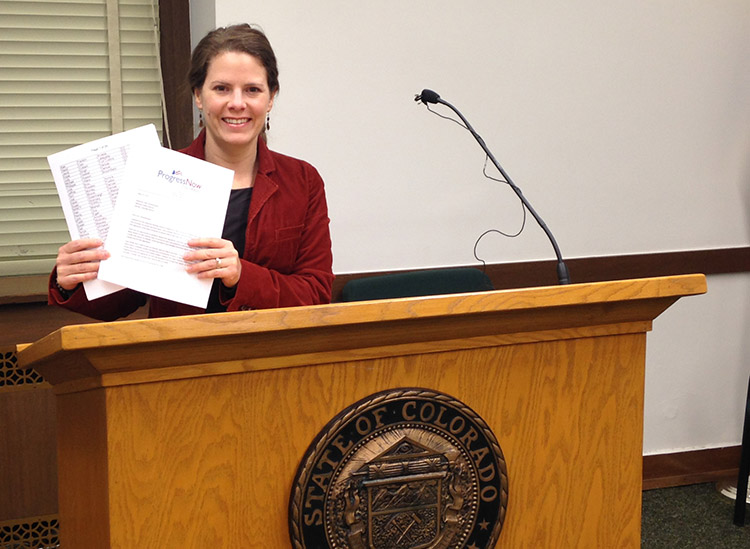 DENVER: ProgressNow Colorado, the state’s largest online progressive advocacy organization, joined today with Colorado Senators Lucia Guzman and Jessie Ulibarri, along with the Bell Policy Center, the Colorado Center for Law and Policy, and other concerned stakeholders to deliver a petition to Gov. John Hickenlooper requesting a veto of House Bill 15-1390–legislation that passed in the final hours of this year’s legislative session to allow lenders to dramatically increase interest rates on specific kinds of personal loans.

“Today, we’re here to deliver the signatures of hundreds of Coloradans to Gov. Hickenlooper, asking for a veto of House Bill 1390,” said ProgressNow Colorado executive director Amy Runyon-Harms. “Lobbyists for the subprime lending industry sneaked in this last-minute bill to allow huge interest rate increases on specific kinds of personal loans used by working families in Colorado and others trying to re-establish their credit. The Colorado Attorney General’s office estimates that this legislation could mean increases of almost 40% to the total cost of a supervised personal loan.”

“Passing bills that could cost thousands of Coloradans millions of dollars at the last minute with no debate is just plain wrong,” said Runyon-Harms at today’s press conference. “There was no opportunity to properly debate this legislation–and that was by design. This bill to allow lenders to hike interest rates on personal loans was passed by both chambers in less than a week. Lobbyists for large financial corporations like Citigroup pushed this legislation for the sole purpose of enriching their clients–at the expense of Colorado’s hard working families who need access to credit.”

“We believe that once Gov. Hickenlooper has a chance to examine the issue in its entirety, a veto of this legislation will be an easy call,” said Runyon-Harms. “We support access to credit, and we want financial services in Colorado to be profitable. If the laws need changing, let’s have an honest debate–not a last-minute swindle that denies citizens a voice in this important decision.”