Make Change This Black Friday (not that kind)

For millions of working people, this holiday will be a struggle. Income inequality is at its highest levels since just before the Great Depression. While the stock market soars and corporate profits roll in, the majority of American families are actually working harder this holiday season and earning less. 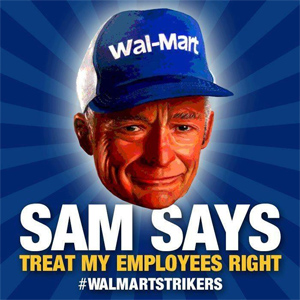 Walmart is now America’s largest employer. Walmart rakes in $16 billion in profits every year due to the hard work of over 1.4 million Walmart employees. Local communities depend on those workers for both the work they do and the money they put back into the community.

The Walton family controls over $150 billion in wealth from their Walmart empire. But did you know the majority of Walmart employees make less than $25,000 a year? That’s not even enough to put food on the table today. Even worse, the company routinely manipulates the hours worked by employees to maximize profits–and always at the worker’s expense.

Can you come to a Walmart Black Friday protest this Friday? Join Walmart workers and other concerned citizens right here in Colorado to call for a fair shot at the American Dream. Here are the details:

When: Friday, November 28th at 10AM
Where: 7455 W Colfax Ave, Lakewood, CO
What: Rally to support Walmart associates in the fight for fair wages and respect

As our economy recovers, it’s unacceptable that the largest private employer in the world, run by the richest family in the country, cares so little for the workers that make their business successful. We’ve got to close the gap for our working families who need and deserve better from corporate America. Thanks for doing your part.