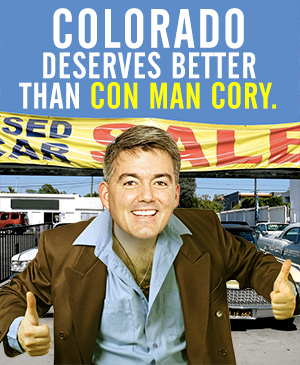 Cory Gardner has been caught in so many lies this election season, it’s hard to keep track of them all. You know about Gardner’s lies regarding his support for banning abortion, and how he took credit for “launching our state’s green energy economy” when the bill he wrote never funded a single renewable energy project.

Gardner also has made claims about health insurance in Colorado that don’t add up. The truth is, hundreds of thousands of Coloradans have insurance today that didn’t used to have it. According to Gallup Research, the rate of uninsured in Colorado has plunged from 17% to only 11% of the population. [1] Despite this, Gardner claims that hundreds of thousands of Coloradans have had their insurance “cancelled.”

Only one can be true: if the rate of uninsured has dramatically fallen, not grown, the “cancellations” story can’t be right.

With only a few days left before the election, it’s too late to change all of the minds that have been misinformed by Gardner’s lies. But you can stand up to these false accusations with your vote. If you haven’t already, return your ballot today. Visit Just Vote Colorado to find out where to return your ballot, vote on a standard voting machine, or even register and vote for the first time. Click here to download ProgressNow Colorado’s ballot guide that includes information on the major races and statewide ballot initiatives.

If you’ve already voted, thank you. Now take a moment to forward this message to your friends who haven’t yet voted. There are just a few days left to do your part, so don’t be shy!

Here’s what I know: if every Coloradan who turned out to stop Ken Buck in 2010 and Mitt Romney in 2012 turns out this year, Cory Gardner doesn’t stand a chance. The only thing that matters between now and next Tuesday is getting out the progressive vote.