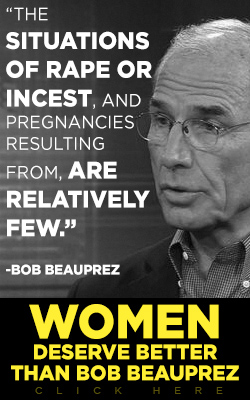 Just when you thought you knew everything about Bob Beauprez, it gets even worse.

During Beauprez’s last run for governor, he proved himself to be hopelessly out of touch on issues that matter to women voters. Beauprez was even forced to apologize for claiming in a Colorado Public Radio interview that 70% of African American pregnancies end in abortion–a claim which is ridiculous, offensive, and bigoted in the extreme.

Another portion of this same interview was published this week. Here is what Beauprez says about abortion, even in cases of rape:

RYAN WARNER: A sixteen-year-old girl is raped. She and her parents want to get an abortion for her. They would pay for it, it wouldn’t be state dollars. You would support a law preventing her from getting an abortion under those circumstances?

BOB BEAUPREZ: Yes, and I’ll tell you very simply why.

BEAUPREZ: I don’t think it’s the child’s fault. And I think we either protect life — all life, especially the most innocent of life — or we don’t. The situations of rape or incest, and pregnancies resulting from, are relatively few…

Not since Todd Akin said that rape victims “have ways” of preventing pregnancy have I heard such a sickeningly offensive comment from a politician. This morning, I hosted a press call with Dr. Rebecca Cohen, an OB/GYN doctor and Family Planning Fellow, as well as a brave survivor of sexual assault to respond to Beauprez’s horrifying remarks. You can listen to the recording here.

“Beauprez’s statement that pregnancies resulting from rape or incest ‘are relatively few’ is both offensive and not backed up by medical science,” said Dr. Rebecca Cohen. “In 2012, Congressman Todd Akin claimed similarly that ‘the female body has ways to try to shut that whole thing down’ in cases of rape. The truth is, women can become pregnant as a result of the crime of rape as much as any other type of sexual intercourse. To infer otherwise for any reason is offensive in the extreme and demeaning to rape victims.”

“It is time that we call rape what it is, an act of degradation and violence, perpetrated on the available,” said Emilie C. Ailts, a survivor of sexual assault. “For a gubernatorial candidate to make outrageously uneducated remarks about the outcomes of the act of rape is at least willfully ignorant and at most revealing of his basic belief that this variety of violence against women should somehow be glossed over and accepted as reasonable. A rape is life-altering and an indestructible wound in a man or a woman’s psyche and is a burden that needn’t be compounded by the blind ignorance and bias of a civilized society.”

Here’s the bottom line: like other conservatives this election season, Bob Beauprez is trying desperately to cover up his fringe record on women’s health and reproductive choice. Beauprez claims he wouldn’t try to ban abortions as governor in 2014, but in his last run for governor he campaigned on doing just that.

Tell Beauprez now that we’re better than this in Colorado–and reject his radical agenda for women.

Women shouldn’t trust Bob Beauprez with our most basic freedoms–and it’s too big of a risk to put him in a position where he can carry out his backward agenda of forcing victims to have their rapists’ babies. The polls are extremely close. We only have a few weeks left to hold Beauprez accountable to his record before the election. Please take a moment to forward this message to everyone you know in Colorado, and urge them to do the right thing.

Thank you. Basic freedoms are at risk. This is too important to ignore.