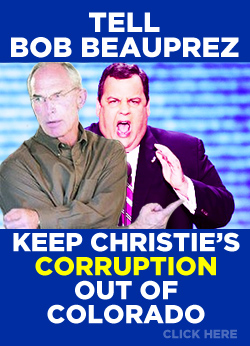 This is the same Gov. Chris Christie’s whose involvement in the “Bridgegate” corruption scandal is making national headlines. Is New Jersey corruption what we want in Colorado?

Send a message right now: tell Both Ways Bob to withdraw from Chris Christie’s Denver fundraiser. And then join us at noon tomorrow, Wednesday July 23rd, as we protest Christie’s fundraiser at the Capital Grille.

Beauprez talks about bringing integrity to Colorado, but he’s participating in a fundraiser with one of America’s most famously corrupt governors. Chris Christie endorsed Bob Beauprez as a candidate “willing to step up and make Colorado strong,” but now the whole nation understands what Christie meant: wielding political power like a mob boss no matter who gets hurt. When Christie’s administration saw a chance to retaliate against a political enemy, they took it, even if that meant making thousands of people suffer.

Tell Bob Beauprez that Colorado deserves better than Chris Christie’s corruption. And join us at the Capital Grille tomorrow at noon to protest Christie’s fundraiser. Please reply to this email with any questions, and I look forward to seeing you there.

We’ll share your names and comments with Beauprez’s campaign, the press, and elected officials. If scandal-plagued Chris Christie is the type of politician Beauprez wants to associate with, that speaks volumes about Beauprez’s character–and the voters of our state won’t stand for it.

Thank you for demanding better.