What does immigration reform mean to you? 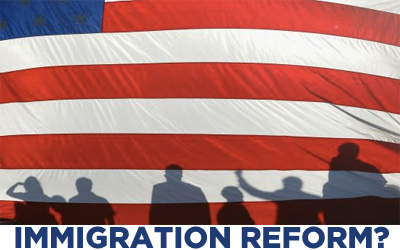 The debate over reforming the nation’s broken immigration system has dragged on for so long that the fundamentals of the issue are sometimes forgotten. We’re going to be talking about this issue more this election year–and in future years–so we wanted to take a moment to tell you where we stand as a progressive. And we want to hear your thoughts.

America is a nation of immigrants and a nation of laws. Nearly all Americans today can trace their heritage to someone who came to America hoping for a better life. People come to America to escape persecution, experience freedom, and to give themselves and their families a shot at something the whole world envies: the American Dream. As immigrants arrive seeking a better life, they make America better too.

But the immigration system in America is broken. Deportations have risen steadily in recent years, and border security has been tightened. But that hasn’t solved the problem. There is still tremendous work to be done to clear the years-long backlog of immigration cases in the courts, to provide a sensible path forward for undocumented immigrants already in this country, and to ensure enforcement of immigration law in a fair and consistent manner.

As progressives, we want immigration reform that makes life better for everyone. America needs immigrants to fuel our economy, but immigration needs to be managed to ensure everyone in America benefits. The children of immigrants in America, whether documented or undocumented, must have the same educational opportunities as everyone else if they are to succeed–and a pathway to citizenship so our investment in their education stays here in America.

What are your thoughts on immigration reform?

One thing we’ve learned is that there are a lot of differing views on this issue, even among people who consider themselves pro-immigration reform. we’d like to hear from you: click here to tell us what immigration reform means to you. As we head into another election year and beyond, your feedback will help ProgressNow Colorado challenge our leaders to finally make progress on this critical issue.