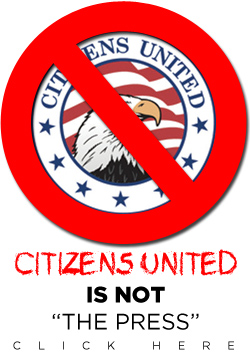 I was talking to a friend the other day–a lawyer friend, you know how they are–and she mentioned that Citizens United was coming to Colorado. I paused for a second to think, “You mean the Supreme Court case? How is that coming to Colorado?” My lawyer friend laughed and reminded me that the Supreme Court case was brought by an actual group of people–two people to be exact–called Citizens United. Well, I guess I just hadn’t thought of it that way.

Turns out, the small group Citizens United has a long history of far right politics and pretty sleazy smear tactics. Back in 1988 a guy named David Bossie (yes, that’s really his name) teamed up with the founder of Citizens United to create the infamously racist “Willie Horton” ads. In 1991, the group funded ads to support Clarence Thomas’ nomination to the Supreme Court.

Then in the mid-2000s, Citizens United upped its game. It hit on a new tactic to smear people and avoid playing by the rules. It goes something like this:

Create a really biased “movie” about your target. They usually did this by taking existing footage of their targets–ranging from John Kerry to Hillary Clinton to Barack Obama–and editing it together in completely dishonest ways to make their point. They would then get this “movie” up on some small, pay-per-view outlet and sell DVDs for $9.99 a pop. The point really wasn’t the movie. The point was to have a movie they could then run ads for. See, they would run these smear ads under the guise of promoting their movie. They did this to get around electioneering and campaign finance rules. This is what led to the infamous 2010 Supreme Court ruling that opened the floodgates of corporate money in elections.

Like I said, a long history of some very sleazy politics and smear campaigns.

I’m telling you all this because Citizens United now has their sights set on Colorado.

Citizens United plans to come into Colorado and bring their dishonest style of big money politics with them. [1] Using their “make a movie” ruse, and then avoiding electioneering laws by running virulent attack ads for that “movie,” they plan to go after Governor John Hickenlooper. And they are asking our partisan Secretary of State Scott Gessler for permission to do it.

They want to spend unlimited money to attack Governor Hickenlooper this fall without disclosing who is funding them. And their plan starts by asking Secretary of State Gessler to rule that they are part of the press–that their attack ads are no different from articles published in The New York Times.

Remember back in 2012 when 74%–yes, three-quarters of all Colorado voters–passed Amendment 65 which called for our members of Congress to support a constitutional amendment to overturn the decision that bears Citizens United’s name? Coloradans spoke out loud and clear that they don’t like this kind of hidden, out-of-state corporate money coming into our state to try and influence our elections.

But that is exactly what is going to be happening over the next few months.

And it’s our duty to stand up and make sure they don’t get away with it.

Citizens United is asking Colorado Secretary of State Scott Gessler for permission to spend unlimited money on attack ads in the fall election season without disclosing where the money came from.

Citizens United should play by the same rules as other groups that attack candidates in the months leading up to the election. They can spend all the money they want, but they should obey Colorado laws that require them to disclose where the money came from.

We’ll spend the next few months keeping you up-to-date and well-informed about all that happens with Citizens United here in Colorado. Because knowledge and information are the best tools we have to combat their underhanded tactics.

Take a second and contact the Secretary of State’s office right now, and let them know you don’t think Citizens United deserves to be called a press entity. They are not The New York Times or the Denver Post. They are a conservative attack group–and they should be treated as such.

Thanks so much for taking the time to get informed about this important story. The only way to fight unlimited corporate money in politics is to expose them for what they are.

PS. Help us hold the line against Citizens United with your donation.