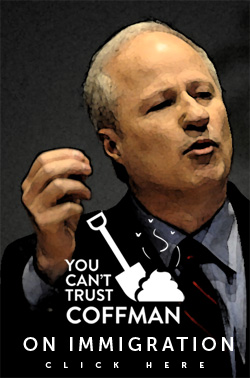 I wanted to make sure you saw what happened Friday morning. Virtually unreported in the media, right-wing Speaker of the House John Boehner and Majority Leader Eric Cantor–two of the top Republican leaders of the 113th U.S. Congress–appeared at the Brown Palace Hotel in downtown Denver for a fundraiser for Rep. Mike Coffman.

After promising to make immigration reform a priority this year, Coffman held a secret fundraiser with the two men perhaps most responsible for the gridlock in Washington, D.C. that’s preventing reform from passing. Coffman’s fundraiser with Boehner and Cantor is a slap in the face to everyone who believed Coffman’s empty promises.

In recent months, Rep. Coffman has told voters that he now supports immigration reform, after years of opposition and using immigrants as political scapegoats. Coffman even introduced legislation to restrict bilingual ballots for legal U.S. citizen voters. The reason Coffman is paying lip service to immigration reform today is simple: the electoral landscape has changed, and Latino voters are on the verge of removing Coffman from office this November.

What Coffman doesn’t understand is that actions speak louder than words. Coffman says he wants a path to citizenship for DREAMer students, but he voted against the very program that’s allowing them to avoid deportation. Coffman says there should be a path to citizenship for immigrants who join the military, but Cantor blocked that proposal just hours after this fundraiser. Coffman says he wants the House to take up immigration reform, but instead of demanding House leaders get serious, he holds secret fundraisers with them.

It’s time to say it: Mike Coffman doesn’t care about immigration reform, he only cares about keeping his job. He’ll say anything to stay in office, but his record proves he doesn’t care about the issues his constituents want addressed.

Tell Coffman right now that you’ve had it with his empty promises and hypocrisy on immigration reform. We’ll send your message to Coffman’s office instantly, and share your names and comments his the press and other public officials.

It’s disappointing that Mike Coffman isn’t a man of his word. I, like many others, had hoped Coffman was serious when he committed to immigration reform after years on the wrong side of the issue. But Colorado deserves better than pandering. Coloradans deserve action. Thank you for helping make sure Coffman doesn’t get away with this.

PS. Help us tell the truth about Coffman with your donation.