Con Man Cory is afraid of us 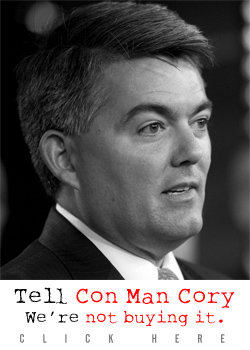 I want to thank everyone who has helped us keep the pressure on Rep. Cory Gardner in recent weeks. After a brief shakeup, the hard reality is setting in for conservatives: Gardner is no better than the out-of-the-mainsteam candidates he pushed out of the U.S. Senate race, and Gardner’s biggest political threat is his own record. If you haven’t already, take a moment right now to sign our petition demanding that Gardner stop misleading Colorado voters about his record.

In the latest issue of the leading national conservative magazine The Weekly Standard, there’s the best evidence I’ve seen yet that our work is making a difference:

[L]iberal groups have fired back hard on what could be Gardner’s biggest liability in the critical Denver suburbs. ProgressNow Colorado began in March, calling out Gardner for his past support for the controversial pro-life “personhood” ballot initiative that failed in Colorado in 2010. (By legally defining every fertilized egg as a “person” under state law, it would have effectively banned all abortions.) Many mainstream pro-life groups, including National Right to Life and the Eagle Forum, object to personhood amendments for being too extreme, and Gardner told the Denver Post in late March that he now opposes personhood efforts. The congressman says he’s pro-life but that he changed his mind about personhood after he learned more about the issue…

Gardner shakes his head at the implication that he’s too extreme. “When people look at my record, they’re going to know that Senator Udall is simply repeating what they think will work—which is nothing more than a tired, sad playbook—because he can’t run on his record,” he says.

The only “tired, sad playbook” in use in this race is the one where conservatives run from their extreme records. No one forced Cory Gardner to support the Personhood abortion bans in Colorado year after year, or to actively campaign to get it on the ballot in 2010. And the truth is, it has been common knowledge that Personhood would have adverse consequences including banning certain forms of birth control since 2008 if not earlier. Gardner is today, right now, a sponsor of legislation in Congress to enact the same sweeping Personhood abortion ban nationwide.

These are the facts. No one is trying to hide from them except for one person: Cory Gardner. If you agree with me that Gardner’s flip-flops and denials are wrong for Colorado, sign our petition telling Gardner to stop misleading the voters about his continuing support for banning abortion no matter what the consequences. We’ll share your names and comments with Gardner’s campaign, the press, and other public officials.

Thanks for standing up–not just for women, but for integrity from our public officials.

PS. Help us hold Gardner accountable with your donation to ProgressNow Colorado today.