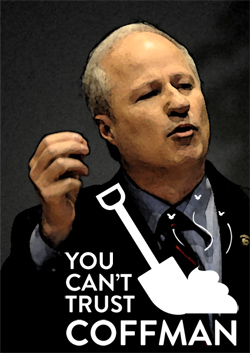 Yesterday, at a press conference in front of the Colorado Supreme Court building, ProgressNow Colorado joined with leaders in the Latino community to kick off our campaign to hold US Rep. Mike Coffman accountable in 2014.

Take a moment now to visit Can’t Trust Coffman, our newest web project, and share the information there with your friends.

It’s not just a slogan: Coloradans can’t trust Mike Coffman. We couldn’t trust him when the Colorado Supreme Court found him guilty of breaking campaign finance laws. We couldn’t trust him when Latino immigrant constituents tried to meet with him–and were denied. And we certainly can’t trust Mike Coffman now as he runs for another term to represent Colorado’s 6th Congressional District.

Coffman is running scared after barely surviving against an underdog opponent in 2012. He is an extremist conservative who now finds himself in a swing district. His attempts to reinvent himself as a moderate to survive politically mean that neither Democrats, Republicans, nor independent voters can trust him.

Coffman has consistently avoided his constituents wherever possible, and refuses to publicly address his extreme voting history. Coffman’s record of extreme statements, that President Obama “is not an American” and that Social Security is a “Ponzi scheme,” prove that he just doesn’t get his constituents in Aurora and the Sixth District.

And not only does he ignore the people he represents, Coffman has a pattern of misusing public office for personal political gain. He has been investigated and found guilty of violating ethics rules and misusing taxpayer money.

All of this and more is documented at Can’t Trust Coffman. Visit now–and spread the word.

We’re also proud to announce, for the first time ever, we’ve launched two parallel websites: one in Spanish (CorruptoCoffman.com), and one in English (CantTrustCoffman.com)–inviting members of the public to learn more about Coffman’s history. The many Spanish-speaking voters in Coffman’s district deserve to know the facts as much as any voter–including how Coffman tried to restrict the availability of bilingual ballots across the nation. And if Mike Coffman can’t understand what we’re saying about him on CorruptoCoffman.com, well then, in his own words, he’s welcome to “pull out a dictionary.”

From now through November, these websites will serve as a clearinghouse for the latest information about Coffman’s record.

Make sure everyone you know does their homework on Mike Coffman. Visit Can’t Trust Coffman today–learn more, spread the word, and take action.

Thank you. Above all, what I want in Colorado are leaders who mean what they say, not politicians who will say anything to stay in office. Let’s make 2014 the year where we demand better from our public officials.