Release: Call for Coffman to apologize for his pattern of corruption 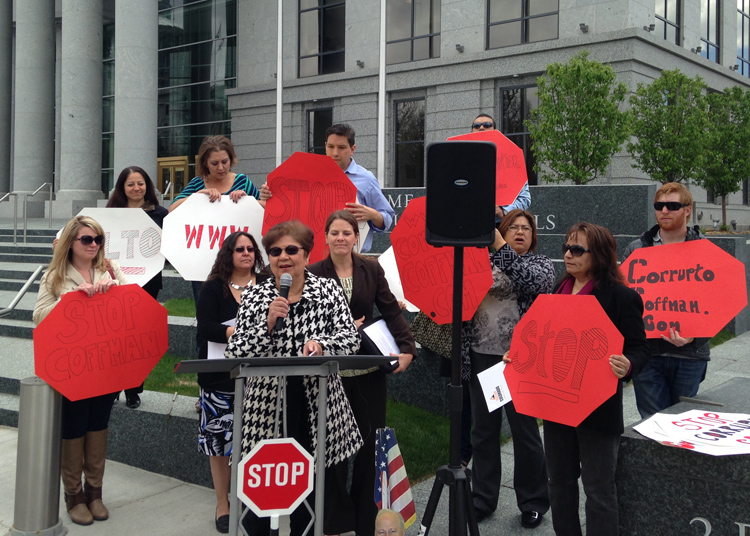 DENVER: Leaders of the Colorado Latino community and ProgressNow Colorado gathered today at the Colorado State Supreme Court, calling for Congressman Mike Coffman to be held accountable for his lack of integrity and history of misusing his public office for political gain.

“Congressman Mike Coffman’s political and personal values are out of line with his Latino constituents. He needs to be stopped,” stated Polly Baca, former state legislator and respected community leader.

“It’s obvious that Mike Coffman has no integrity and changes his tune when it benefits his personal career. Not only is he someone whose word we cannot trust, but he is just another politician who is just words and no action,” said Rebecca Torres, a 25-year resident of the district and registered voter. “He has taken NO action to make a pathway to citizenship become a reality.”

“I became a citizen in 2006 for many reasons, but the most important one is because I wanted to vote. To me, voting is not just filling out a piece of paper – it is my voice. To me, my ballot represents my dreams and possibilities for a better future,” said Josefina Urquijo, a 9-year resident of the Sixth Congressional District. “So when I vote, I make sure I do my homework, and the more and more I learn about Mike Coffman, the more I am disappointed. So today I ask my neighbors and my community to get educated and to visit www.CorruptoCoffman.com.”

Following these statements, Amy Runyon-Harms, Executive Director of ProgressNow Colorado, announced their web launch of CorruptoCoffman.com. “We are launching CorruptoCoffman.com to answer an outcry from the Latino community to reveal the real Mike Coffman, a dishonorable and untrustworthy politician.”

For the first time ever, ProgressNow Colorado launched two websites: one in Spanish (CorruptoCoffman.com), and one in English (CantTrustCoffman.com) inviting the public to learn more about Coffman’s history of corruption and misuse of office for personal gain. Earlier this year, a study by Time Magazine noted that the problem of corruption is the number one concern among those surveyed throughout the world.

The website also shows Coffman was 18th out of 435 members of the House of Representatives in terms of taking the most money from out-of-state oil and gas corporations in the most recent disclosures. The group is also planning to release digital ads as part of the campaign.

Coffman’s Pattern of Corruption and Misuse of office

Coffman and Karl Rove appear to have held a secret meeting at the Brown Palace together. Both Rove and Coffman have a history of misusing their public office for political/personal gain. (Colorado Statesman, 4/4/2014)

Coffman voted against regulating Wall Street after financial crisis (HR 4173, Vote #413, 6/30/10) and has received over $140,000 in campaign contributions from the finance and banking industry since 2008. (Influence Explorer)

Allowed an employee in his office to operate a partisan side business. (Denver Post, 2/14/2008)

Did not report that a lobbying firm that is helping run his congressional campaign also did work for a voting machine company seeking recertification from Coffman for its machines. (Denver Post, 2/14/2008)

Coffman was involved in a matter that was referred to the FBI and was accused of misuse of his office in an attempt to sell Colorado’s tobacco settlement office to Wall Street bankers (Associated Press, 8/25/1999)