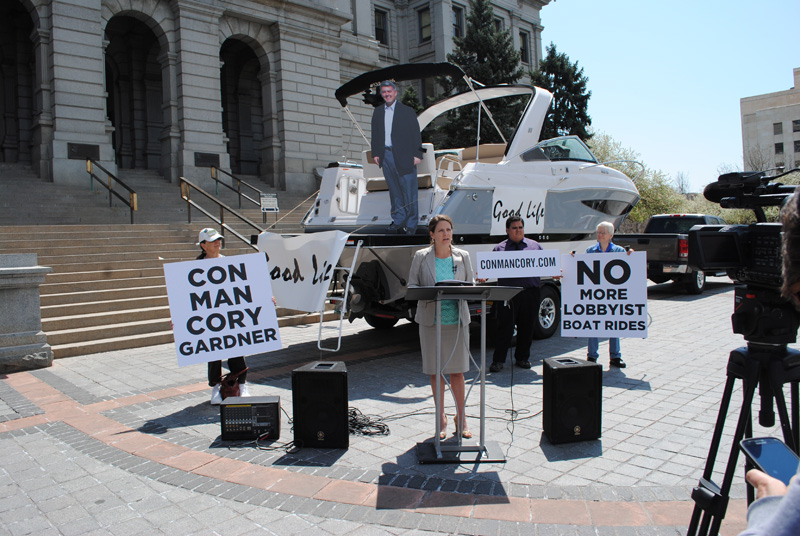 Yesterday, ProgressNow Colorado kicked off our campaign to hold Cory Gardner accountable in 2014, calling on Gardner to disclose the deals he made at a controversial closed-door fundraising holiday off the coast of Florida. Denver’s FOX31 News reported on our event:

On Monday, to dramatize its point, ProgressNow Colorado rented a yacht, taped a sign to it bestowing upon it the same name as one of the boats Gardner went fishing on in 2012 — The Good Life — and towed it to the west steps of the Colorado Capitol to serve as a backdrop.

The group even had a life-sized cardboard cut-out of Gardner perched astern atop the yacht.

“To this day, Gardner has never disclosed who he spent time with during his Florida junket, what deals he may have made while boating on The Good Life and who among the donors he hobnobbed with may be funding his Senate campaign today,” said Amy Runyon-Harms, ProgressNow Colorado’s executive director. [1]

Colorado deserves to know who Cory Gardner is making promises to. If you haven’t already, send a message to Gardner right now, telling him to disclose the special-interest donors from this controversial closed-door fundraiser, and who among them is funding his Senate campaign today.

[ProgressNow Colorado] set sail its “Conman Cory” campaign by parking a 28-foot yacht it christened “The Good Life” in front of the capitol in Denver. A life-size cardboard cutout of Gardner stood on the deck dressed in politician garb, smiling down at the small crowd of amused onlookers gathered on the cobblestones walkway in the sunlight…

“Congressman Gardner said he went to Washington to fight for Coloradans,” said ProgressNow Director Amy Runyon-Harms. “We’re calling on him to stop conning Coloradans and disclose who he met with in Florida and what he promised them and if any of those people are contributing to his Senate campaign. [2]

Click here: send a message right now to Cory Gardner that you’re not buying what he’s selling. Coloradans deserve to know who our leaders are selling access to, and what promises are being made behind closed doors by politicians–promises that affect us all.

Once you’ve sent a message to Gardner, check out our new Con Man Cory website–a clearinghouse for important information about Cory Gardner’s record that will grow throughout this election year. We’ve just begun the long campaign to hold Gardner accountable for his record of putting special interests ahead of the needs of Colorado, and we’ll post our updates to Con Man Cory first. Sign up to get the latest news, and spread the information we’re compiling at Con Man Cory with your friends.

Thanks again to everyone who is helping us stand up to Gardner, both by showing up in person and taking action online to hold him accountable. Working together, let’s make sure that everyone in Colorado understands what’s at stake in this election. What I want are leaders committed to upholding our shared values, and to leaving Colorado better than we found it. We can do better than Con Man Cory.

PS. You can also help us take on Con Man Cory in 2014 with your donation.