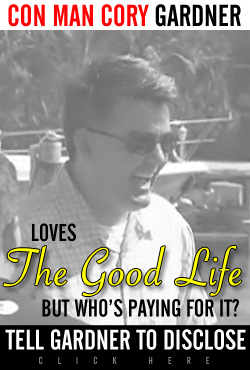 Tomorrow, Monday, April 21, at noon we’ll be holding a press conference on the west steps of the Colorado State Capitol to expose Gardner’s record, and we want you there with us.

Con Man Cory Gardner claims to be in Washington fighting for the people of Colorado, but his record tells a different story. Gardner has quickly become a creature of the Washington, D.C. insider crowd, taking advantage of every perk offered to him by corporate lobbyists and out-of-state special interests.

A CBS News investigative report disclosed a closed-door fundraiser held in 2012 on behalf of Gardner and several other hand-picked Republican members of Congress. Special interest donors reportedly gave tens of thousands of dollars in exchange for access to Gardner and other members of Congress. Gardner even served as a “guest bartender” at a “happy hour” that required a $10,000 donation just to get in.

CBS News also reported that the top donors at this event went fishing with Gardner and other members on a fleet of expensive boats, including a yacht named “Good Life.”

For those of you who can, please join us TOMORROW at noon as we call on Con Man Cory Gardner to come clean and disclose his ties to special interests. Click here for directions to the Colorado State Capitol. If you can’t make it in person, click here to send a message calling on Gardner to disclose ties to the “Good Life” lobbyists.

How many ordinary Coloradans have $10,000 to spare so Cory Gardner can serve them drinks? To this day, Gardner has never disclosed who he spent time with during this Florida junket, what deals he may have made while boating on the “Good Life,” or who among the special interest donors he hob-nobbed with may be funding his U.S. Senate campaign today.

The people of Colorado deserve better than a politician who claims to represent us while selling us out to corporate lobbyists and special interests on swanky yachts. It’s time for Gardner to immediately disclose who attended his Florida fundraising junket, what he promised in exchange for their money, and who among his fellow passengers on the “Good Life” may be funding his U.S. Senate campaign today.

Did Cory Gardner sell out Colorado so he could live the “Good Life?” That’s a question only he can answer. Join us tomorrow, Monday, at noon on the west steps of the Colorado State Capitol to demand an answer.

P.S. If you can’t join us tomorrow and would like to make your voice heard, sign this petition calling on Con Man Cory Gardner to come clean on his insider lobbyist ties, and we’ll make sure he hears directly from you.