BREAKING: The story Mike Coffman doesn’t want you to read 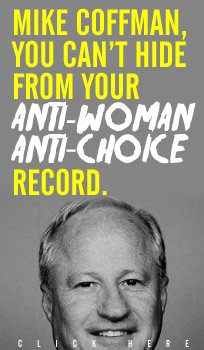 Two weeks ago, I emailed asking you to challenge Congressman Mike Coffman on his long record of support for a total ban on abortion, even in cases of rape and incest. Coffman’s past is finally catching up with him in 2014, and he faces defeat this year in large part because the voters of his diverse, competitive district can’t trust him either way on the issues–having reversed himself over and over in a desperate attempt to remain in office.

This week, The Denver Post’s Kurtis Lee wrote a critically important news story detailing Coffman’s attempt to flip-flop on his longstanding support for banning abortion. The title of the story was, “Mike Coffman adjusts abortion stance in cases of rape and incest.”

A short time later, this story disappeared from The Denver Post’s website. I’m not kidding.

What happened? The editor says the story “shouldn’t have run,” but he admits that everything in the story is true. Did Coffman’s campaign bully The Denver Post into censoring this story? Here are a few paragraphs from the story that explain why Mike Coffman might not want you to read it:

As the issue of abortion rights becomes a factor this election season, U.S. Rep. Mike Coffman has shifted his views on a woman’s right to choose and on a controversial personhood initiative.

Not long ago, Coffman won praise from hard-line pro-life groups for his opposition to abortion even in cases of rape and incest and support of personhood initiatives that would have effectively outlawed abortion in Colorado.

Over the weekend, in a brief interview at the state GOP assembly, Coffman broadened his position on abortion, saying he now supports it in cases of rape and incest — a position he did not voice in 2012, when he supported abortions only to protect the life of the mother…

Coffman supported personhood measures in 2008 and 2010, although voters overwhelmingly rejected them.

In 2013, Coffman voted for yet another abortion ban bill, and tried to hide behind the fact that the bill did have an exemption for rape and incest victims. But that doesn’t change the facts: Coffman’s long record of support for banning abortion is undeniable. Coffman is running away from that record to survive this election, but he can’t hide his true colors.

Take a moment right now to tell Coffman enough is enough: stop hiding from your anti-choice record. Add your comments to the petition, and it will be delivered to his office instantly.

Dishonest flip-flopping on the issues is bad enough, but I won’t stand for politicians bullying the press into self-censorship. Thank you for demanding better from our leaders.

PS. We have in our possession the full text of the Denver Post’s censored story on Coffman and banning abortion. If you’d like to read it in its entirety, send me an email at [email protected].