Money Badger for the win! 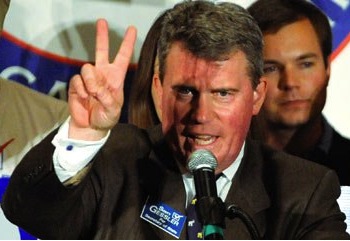 During this month of basketball madness, I need your help to get Colorado a win. Our Secretary of State, Scott Gessler, was selected to participate in “March Badness” — a friendly competition between ProgressNow states to single out the worst of worst politicos in the nation. Propel Scott Gessler out of the Not-So-Sweet Sixteen and into the Crazy Eight by voting now! We have until midnight tonight to make it to the next round!

Since taking office in 2011, Scott Gessler has faced scandal after scandal over his own efforts to tilt the playing field to his party’s advantage. Gessler, the state’s chief elections officer, actually once said that “a good election” is when “Republicans win.” [1] Gessler is the only statewide politician in office today who has been found by Colorado’s Independent Ethics Commission to have “breached the public trust for private gain.” [2] Show the rest of the country Coloradans recognize we have the worst elected official in office today — make Gessler the March Badness Champion. If we garner enough votes, Colorado moves to the next round.

Gessler is up against Nevada’s Jim Wheeler. While Assemblyman Wheeler has made some unfortunate comments in his past, he’s got nothing on our own Gessler. Scott “The Money Badger” Gessler is running for Governor, and his record speaks for itself. Between the attempted moonlighting, voter suppression, corruption, use of taxpayer dollars to attend partisan conferences, and tanking the budget of the Secretary of State office to help his business cronies, he’s done it all. We think he deserves to win the title for most unethical politician. Do you?

PS – We only have until midnight to help the money badger advance to the crazy eight. Take a moment and vote right now.