DENVER: In response to Cory Gardner’s shocking flip-flop away from his prior support for a total ban on abortion in Colorado, [link] including in cases of rape or incest, ProgressNow Colorado, the state’s largest online progressive advocacy organization, launched a statewide campaign demanding that Gardner stop misleading the voters.

“For years, Cory Gardner has proudly been on the fringe of the debate over women’s reproductive rights,” said ProgressNow Colorado executive director Amy Runyon-Harms. “Gardner has repeatedly endorsed ballot measures and introduced legislation to ban all abortions in Colorado, making no exceptions for victims of rape or incest. Gardner campaigned for Congress in 2010 on a platform of support for the notorious ‘Personhood’ abortion ban measure, which failed by over 70% of the vote that year.”

“It’s just surreal,” said Runyon-Harms. “Step right up to Con Man Cory Gardner’s game of revisionist history! What’s next? Will he start caring about the environment, public education, voting rights, and the poor?” 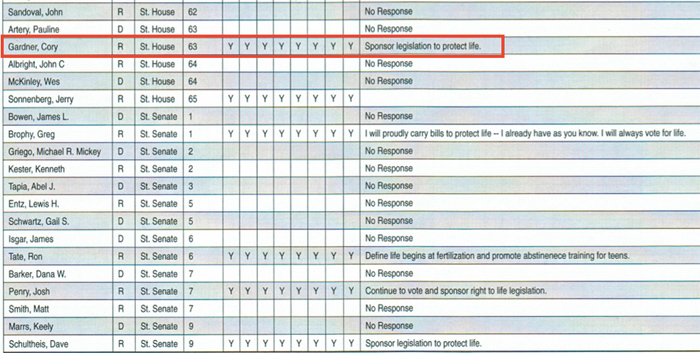 “Gardner now claims he ‘started to rethink’ banning abortion after 2010,” said Runyon-Harms, “when Colorado voters rejected Personhood by over 70%. But how can that be true when he just last year co-sponsored Personhood for the entire nation? It just doesn’t add up.”

“Once you know all the facts,” said Runyon-Harms, “it’s painfully obvious: Gardner is afraid of his anti-women record and is trying to run away from it. The only reason Gardner is pretending to ‘rethink’ this issue is he knows his record will repel women and independent voters. Gardner knows that Colorado women decided the last U.S. Senate election against Ken Buck in 2010, and he doesn’t want to share Buck’s fate.”

“But it’s too late,” Runyon-Harms said. “Colorado women know a cowardly flip-flop when they see one.”