Stand with Mark Udall against the CIA’s abuse of power 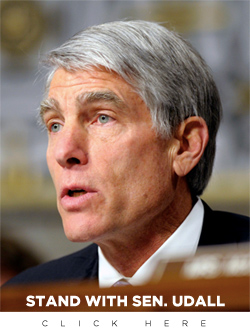 For years, Senator Mark Udall of Colorado has been fighting to rein in abuses of federal power in the name of combating terrorism. Sen. Udall warned the American people about the dangers of mass surveillance against millions of innocent Americans for years before anyone knew the name Edward Snowden. To Udall’s great credit, he has consistently fought for our civil liberties in Congress–regardless of which party occupies the White House.

Today, Sen. Udall needs your help. Click here to stand with Udall as he confronts the Central Intelligence Agency’s most recent abuse of power.

News reports this week of the CIA’s alleged hacking of Senate computers to thwart the investigation into illegal detentions and interrogations have rocked Washington. [1] In response, Sen. Udall says the future of CIA Director John Brennan is in doubt. “The CIA has an important role to play, but if the public doesn’t trust the CIA, if the Senate overseers don’t trust the CIA, I don’t know how Director Brennan can continue to lead the agency,” Udall told reporters.

Congressional oversight is one of the most important checks that exists against federal abuse of power. If Congress can’t do their jobs holding intelligence agencies accountable, the risk to the civil liberties of every American is fundamental and grave. There is perhaps no more serious issue being debated in Washington today than these basic matters of unreasonable government intrusion, detention, and interrogation. It doesn’t matter which party is in the White House–we have to stand together, left and right, to protect the values that define us as Americans.

That’s the fight Sen. Mark Udall of Colorado is leading right now. Click here to stand with him. We’ll share your names and comments with Sen. Udall’s office, the media, and other public officials.

Thank you once again for standing up for what’s right regardless of party affiliation. It’s personally disappointing to me that we are still having debates over civil liberties that should have ended with the Bush administration, but I’m grateful to have a leader like Sen. Udall speaking for me today. Help me send that message to Washington.