Not another Obamacare horror story! 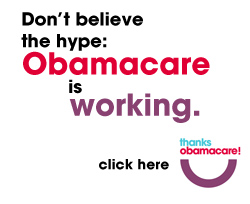 Last Friday, I was reading the Denver Post when I saw a story that shocked me. This front-page story described a terrible experience after a single man’s health insurance was “cancelled.” The story claimed his medication would be unaffordable, and that his deductible was so high the coverage would be worthless.

There was just one problem with this “Obamacare horror story,” like so many others being highlighted in television and radio ads. It wasn’t true. The details of the story fell apart when examined. In truth, better insurance options are available to the subject of this story for less cost.

Across the nation, right wing special interest groups, many funded by the infamous Koch brothers, are spreading the false message that the Affordable Care Act, a.k.a. Obamacare, is hurting people. In Louisiana, they’re hiring actors to tell fake stories about the health care law–even admitting that the commercials don’t describe real events. Other ads are telling half-truths, stories about so-called “policy cancellations” that never mention the new coverage consumers are getting is better and more affordable. Here in Colorado, opponents of health care reform are spreading the story that “over 300,000 people lost insurance,” when the truth is that almost all of those people were offered renewals of their existing policies.

Tell the radical right you’re not putting up with their lies any longer.

Fact-checkers in the Washington Post and other major media outlets are doing their best to refute these false claims about health care reform as they surface. Don’t take my word for it: read these recent stories in the Post, the New York Times, the Los Angeles Times, Salon, MSNBC, and many more. The fact is, Obamacare is working. Millions of Americans are obtaining new and more affordable health coverage. Millions more are enjoying new benefits and protections like the requirement that pre-existing conditions be covered. To repeal health care reform, now that it’s helping so many people, would be an absolute travesty.

But that’s only half the battle. These lies about Obamacare have circulated for years now. Many of your friends and neighbors have never heard the truth and only know what they’re seeing in news reports–many of which are simply wrong as you can read in the stories above. Once you’ve signed our petition, forward this message to ten or more of your friends. Post links to the stories above on your Facebook page. Don’t assume the people in your life know the facts about Obamacare, because millions of dollars have been spent on misleading them. It’s up to you to make sure your own friends and family know the truth.

Working together, health care reform is going to succeed and America will be better for it. Thanks for helping set the record straight.

PS. The right wing is counting on their misinformation spreading faster than the truth. Please forward this email to ten of your friends after signing our petition, and share these news stories debunking the horror stories with everyone you know. Thank you.