About time–stand up for marriage equality in Colorado 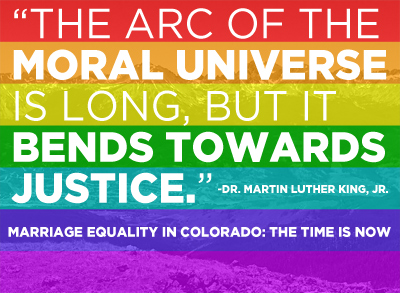 Love. Respect. Commitment. These are some of the reasons I married my husband ten years ago – why we made the decision to stand up in front of our friends and family and make a lifelong allegiance to one another. We were so lucky to have had that opportunity in 2003, just because I happen to be a woman and he a man.

In 2004, I began working in the lesbian, gay, bisexual and transgender movement, fighting for equality for so many people I am honored to call friends. 2004 is also the year eleven states voted to ban same-sex marriage. Colorado voters followed suit in 2006. And let’s not forget Colorado’s passage of Amendment 2 decades ago, which denied gay and lesbian Coloradans equal protection in the state and was later struck down by the US Supreme Court.

Today, I am proud to say a majority of Coloradans support the right of gay and lesbian people to marry the person they love. [1] And just this week, nine Colorado couples made a courageous move to ensure that other loving couples can experience the same joy and dignity of honoring their commitment to one another by filing a legal challenge to overturn Colorado’s ban.

Let these nine couples know you are standing with them in this fight. Sign our letter in support of them.

We’ll watch this lawsuit play out and keep you up to date. In the meantime, talk to your friends and neighbors about why marriage matters – for all families. And ask them to sign on to let these couples know we’ve got their backs.

As Dr. Martin Luther King Jr. said, “The arc of the moral universe is long, but it bends towards justice.” Let’s hope that is true for these nine couples- and for thousands of committed couples across our state.

P.S. I can’t imagine having to go to court to defend my right to marry the person I love. Sign our letter of support for these brave Coloradans who are putting themselves out there to make sure that every one of us is treated with the same compassion and respect when it comes to something as personal and fundamental as marriage.