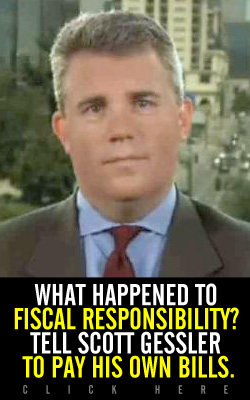 So much for the “party of fiscal responsibility.”

Colorado’s Secretary of State Scott Gessler has never been one to play by the rules. Since taking office in 2011, Gessler has faced scandal after scandal over his own efforts to tilt the playing field to his and his party’s advantage. Gessler is the only statewide politician in office today in Colorado who has been found by the state’s Independent Ethics Commission to have “violated the public trust for private gain.”

Now we learn Gessler can’t even manage his own department’s budget. After slashing fees on business registrations and other services performed by his office, news reports have revealed that the Secretary of State’s office is millions of dollars in the red. Gessler blames political opponents, but these were his decisions. Cutting fees on business is a great way to pander while running for higher office, but taxpayers shouldn’t be on the hook for it.

Send a message to Gessler right now: tell him you expect better.

Don’t take my word for it. Even the conservative Grand Junction Sentinel [1] says Gessler is wrong to blame others for his own mismanagement:

“Unfortunately for the [Joint Budget Committee], Gessler loves an audience and he will undoubtedly use the grandstand the budget committee is providing him to loudly proclaim his victimhood. But the JBC holds the higher moral ground in this dispute. Gessler got himself into this predicament by sharply cutting business fees for his cash-funded office, when his office had a large surplus several years ago, refusing to put a portion of the surplus into the state general fund as lawmakers demanded.”

Over the past three years, Scott Gessler has caused more controversy, and been hit with more ethics scandals, than any politician in this state. By simple yardsticks of scandal and mismanagement, he’s the worst Secretary of State Colorado has seen in decades–maybe ever. Enough is enough: tell Scott Gessler to withdraw his request for millions more taxpayer dollars to cover his office’s avoidable shortfall. He’ll receive your message instantly, and we’ll share your comments with the media and other public officials.

The only thing Scott Gessler is better at than getting into trouble is making excuses. If Gessler can’t manage the finances of a single department, how could anyone even consider entrusting him with more responsibility? It just doesn’t make sense. Let Gessler know you’re not buying it, and that you expect better.