You won’t love this 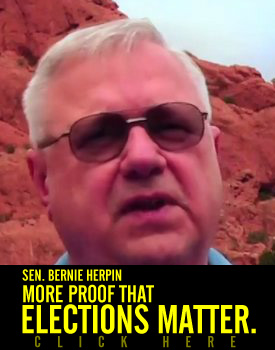 Do elections really matter? Last fall, a mere 10% of voters in Colorado Springs cast ballots to recall our Senate President and replace him with a darling of the gun lobby named Bernie Herpin. It didn’t take long for Herpin to show us his true colors. This week in a response to a question about James Holmes, the accused gunman in the Aurora theatre shooting, he said:

“As it turned out, that was maybe a good thing that he had a 100-round magazine, because it jammed. If he had four, five, six 15-round magazines, there’s no telling how much damage he could have done until a good guy with a gun showed up.”

Do elections matter to you? Donate $20 a month to ProgressNow Colorado TODAY to fight for fair elections and hold politicians like Bernie Herpin accountable for these kinds statements. We want you to be one of 44 new monthly donors by Presidents Day (one for every President) to build a deep war chest for the next election.

Herpin’s remarks are senseless: the Aurora shooter fired dozens and dozens of shots before his rifle jammed. It was not “a good thing” in any way that he was able to buy a 100-round magazine. Can we do better when debating important matters of public safety in Colorado?

Yes we can. Elections do matter. Only 10% of voters turned out to put Bernie Herpin in office. Do you want your elected official to stand up for the things you care about? When more people can decide who represents them, democracy works better.

Join hundreds of donors and give $20 every month. Your donation will go directly go to fighting for diverse and fair elections and holding politicians accountable who try to buck the system.