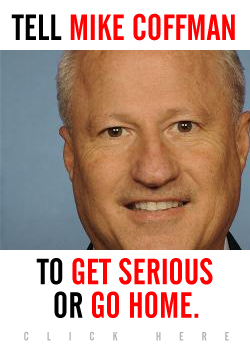 Across America, support is building for comprehensive reform of our nation’s broken immigration system. In President Barack Obama’s State of the Union address this week, the challenge was issued to Congress to put aside election year politics and pass immigration reform now. The U.S. Senate has already done so, and all eyes are on the Republican-controlled House.

In response, Rep. Mike Coffman attacked the President’s address as a “partisan pep rally,” and said he and his fellow Republicans don’t want to pass comprehensive immigration reform, preferring a vague and piecemeal approach at some unspecified point in the future.

Click here: tell Mike Coffman you’ve had it with his double dealing on immigration.

Coffman is considered one of the most endangered incumbents in Congress in 2014. Formerly the representative of the district that elected the anti-immigrant extremist Tom Tancredo to Congress, in 2011 Coffman’s district was remade into an economically and culturally diverse battleground that includes most of the city of Aurora. Since then, Coffman has frequently paid lip service to reforming immigration–in marked contrast to his previous statements and actions.

Today, it appears that Coffman has been playing immigration reform supporters for fools the whole time. Coffman and the Republican-controlled House have demonstrated that they have no real desire to tackle this issue. Meanwhile our economy and millions of working families in America suffer. We have a chance to fix this problem now, as polling clearly shows Coffman’s constituents want. And lip service is not enough.

Send a message right now: tell Coffman to end his deceptions, and demand the Republican-controlled House take up a comprehensive immigration reform bill.

Thank you for taking quick action to hold Coffman accountable. The fact is, after Coffman’s seeming change of heart on this issue, he’s had many chances to do the right thing, and he hasn’t–dashing the hopes of reform supporters who hoped he would lead on the issue. If he won’t do what he promised, there’s only one solution for the voters in his district: at the ballot box. Help us send this message to Coffman today.