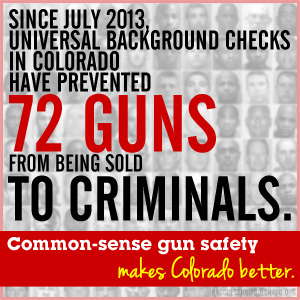 Just yesterday, the Colorado Department of Public Safety released new information showing that these laws are working: in just the first few months, the new law requiring criminal background checks for most transfers of guns in Colorado has stopped dozens of criminals from illegally obtaining guns. And every bit as important, thousands of law-abiding citizens are continuing to buy and sell guns with minimal inconvenience. Despite all the dire predictions from the extreme right, common-sense gun safety in Colorado is a success.

Click here to send a message to our Colorado legislators, thanking them for standing strong in the face of vicious personal attacks to protect our communities from gun violence.

The smear and retaliation campaign by the extreme right against progressive legislators who backed this year’s gun safety reforms has taken a terrible toll. But they were right to not give up. Now we can see the reforms they fought for are working–preventing guns from being sold to people who shouldn’t have them–while allowing law-abiding citizens to go about their business. Common-sense gun safety in Colorado is making our state better.

Take a moment right now to thank progressive Colorado legislators for doing the right thing in the face of tremendous pressure. We’ll deliver your names and comments to legislators and the press.

As Eleanor Roosevelt once said, “what you don’t do can be a destructive force.” In response to the tragedies of 2012 in Aurora and in Newtown, Colorado legislators took necessary action. They need to know that the people of Colorado stand with them, and can see through the lies now that the new laws are proving effective. Thank them for their perseverance, and then forward this message to your friends and neighbors.