Yesterday afternoon, something truly remarkable happened on the floor of the U.S. House of Representatives. A representative from Florida was speaking in support of comprehensive immigration reform legislation, H.R. 15, and noted the presence in the gallery of immigrant families who had traveled to Washington to advocate.

The Republican in charge of the House declared Rep. Joe Garcia of Florida out of order for mentioning those families. In response, Rep. Jared Polis of Colorado erupted in anger: 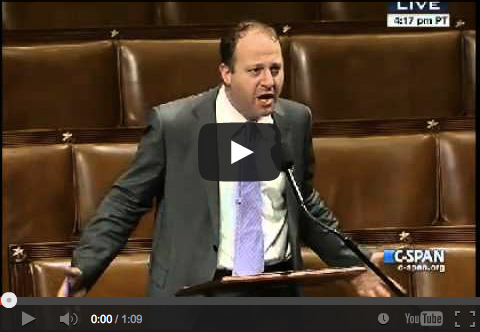 Sign our petition: tell Rep. Polis that you’ve got his back.

In Washington, a formerly bipartisan drive to reform America’s immigration system is breaking down as Republicans in Congress abandon the promises they made. Like so many other issues, denying President Obama a victory is more important to the Republican-controlled House than solving this decades-old problem. It is a terrible and avoidable injustice.

Rep. Jared Polis is right to be outraged. So am I. And I have rarely been as proud of a Colorado member of Congress as I am today of Rep. Polis. Sign our petition thanking Rep. Polis for taking this brave stand against right wing obstruction. Forward this email to all of your friends and neighbors, and invite them to stand with Jared. We’ll deliver your names and comments to Rep. Polis and the media.