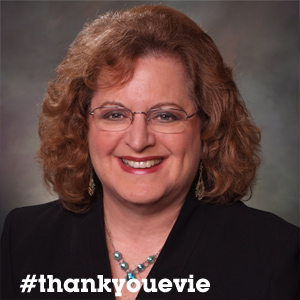 I am truly saddened to learn today that Evie Hudak is resigning from the Colorado Senate. Not only is Colorado losing a great leader, but the right wing has succeeded in breaking our democratic process by initiating an endless string of recall elections. Extremists believe they have found a way to overcome the electoral losses they’ve suffered for a decade, and rather than listen to Coloradans who believe in moving our state forward, they’ve chosen to pursue the route of radical recalls for no good reason.

Click here to thank Evie Hudak for her years of faithful service to all Coloradans.

Evie Hudak has been a champion for progressives in the Colorado Senate. As chair of the Education Committee, Sen. Hudak fought for a great education for every Colorado student. Her work on behalf of women victims of violence, including legislation this year to prevent domestic abusers from having guns, has made a profound difference and will save lives as a result. Sen. Hudak’s decision to leave office is an act of bravery that inspires us all.

Above all, we must put an end to the partisan political games that made endless recalls attractive to the far right. The General Assembly and Colorado voters must take action to ensure that mail ballots are not suppressed in recall elections. We would like to go a step further, and require that recalls have a real justification, such as a crime committed, before they can go forward.

But today, join me in honoring the bravery and leadership of Evie Hudak. Evie deserved better than she got, and we will work to ensure her legacy of common sense solutions will remain intact in Colorado.